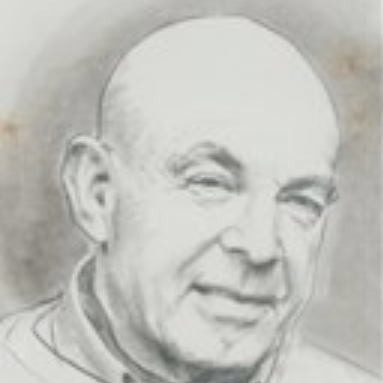 George A. Hoy Jr., 92, drawn by Ed Vebell, consuegro [in-law] and world famous illustrator. Hoy's funeral will be in June 2019. 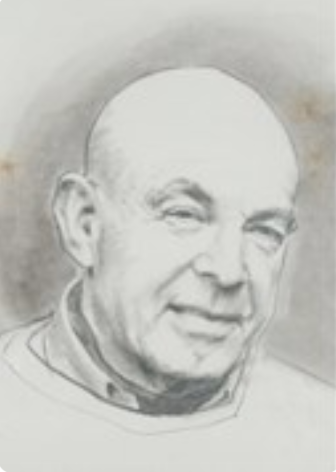 George A. Hoy Jr., 92, drawn by Ed Vebell, consuegro (in-law) and world famous illustrator. Hoy’s funeral will be in June 2019.

George and Katie were a rare example of partners in both marriage and business, having operated the Inn at Brandywine Falls for the past 30 years, writing two books, hosting countless guests, swapping stories with guests that just make you feel good about people and life.

With a master’s degree in experimental learning theory from Kent State University, George worked for General Motors in personnel, then as industrial psychologist and training director at the former Cadillac Tank Plant (present IX Center) and taught a night class in statistics at Baldwin Wallace while living in Snow Village in Parma, where he was elected cooperative president.

He became field editor, then management editor for the McGraw Hill publication, Factory Management and Maintenance Magazine, followed by executive editor and publisher of the Encyclopedia Division of McGraw Hill in New York, publishing encyclopedias in science, art, religion, and biography.

Living in Darien at the time, he was elected to the Representative Town Meeting. He returned to the Cleveland area to join World Publishing, owned by Times Mirror Corporation, publishing dictionaries, college texts, religious and general nonfiction works while residing in Bay Village.

— This obituary previously was published in the Cleveland Plain Dealer. Arrangements assisted by Ferfolia Funeral Home.

The family moved to Laytonsville, Maryland, initially for a Catholic encyclopedia project for World Publishing. While there, George founded Microform Publishing Company in 1969 to create a collection of the best copyright protected reference books existing in print, with a consolidated index, on microfiche, a valid Wikipedia before its time.

In Hudson, George served on the Board of Trustees of Western Reserve Academy during the capital campaign, as chairman of the Municipal Planning Commission, for which he authored the first Hudson Comprehensive Master Plan to preserve the historic town center in the 1970s, and the Hudson Municipal Board of Appeals.

Born in Cleveland on Sept. 9, 1926, George spent most of his life within 15 miles of the Cuyahoga River, about which he wrote: “Fathered by a constant freeze; Mothered, then, by warming breeze; The glacial motion glacially stopped And glacial rubble was glacially dropped And the river, draining South, turned North…”

George has made the turn and will return to the earth in a private green burial at the Foxfield Preserve.

Family and friends are invited to gather on June 23, 2019, at the Inn at Brandywine Falls to celebrate his spirit, his wit, his can-do attitude, his drive toward the next project to make the world a better place. More definitive information for this memorial celebration will be published closer to the time.

Please — no flowers. George would rather you hug a loved one, do something kind for a stranger, adopt a rescue dog or goat, donate to a cause he’d appreciate, or fight climate change and improve your own health by going vegan.