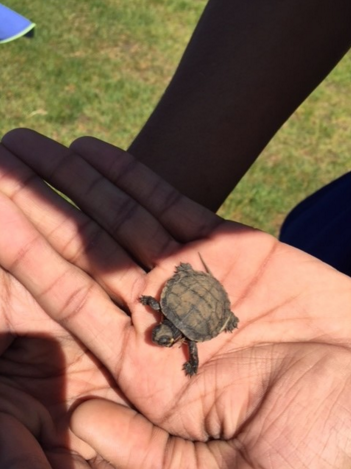 This picture of a baby eastern box turtle was contributed by Pam Bass of Darien. The picture was taken this past week at Woodway Country Club (find more information about these turtles below):

If you have a picture of wildlife in Darien, share it with the rest of us! Email it to Dave@Darienite.com.

According to the state Department of Environmental Protection website (we’ve slightly edited this excerpt):

A medium-size turtle readily distinguished by its high domed shell, and hinged plastron, with moveable front and rear lobes that enable the turtle to completely enclose itself within its shell. 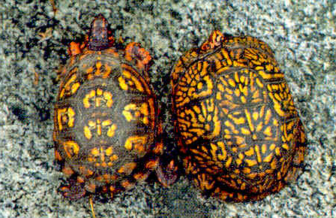 The carapace coloration is highly variable, with a pattern of yellow or orange on a brown to black background. New England box turtles are quite large when compared to those found further south, adult carapace length 125-175 mm.

Connecticut is near the northeastern range limit of this species. Box turtles are restricted to the low-lying sections of the state, and rarely are found above 700 feet.

And when you’ve got an event — from a tag sale to a school fair — post it on our events calendar.

Deciduous woodland and overgrown old fields where turtles have ample cover and sunlight are favored. Although a terrestrial turtle, it is still wetland-dependent, returning to water to drink, and to escape heat and drought.

Box turtles are often encountered near the edges of wetlands and, in many areas, box turtles retreat into low-lying wet woodland to hibernate. This is a long-lived species and animals over 100 years old have been reported. Box turtles take well over a decade to reach maturity and have low egg outputs. Therefore, the increase in adult mortality is a critical issue affecting sustainability of turtle population.

Whether this loss occurs through road mortality, collection, or even such seemingly benign activities as “rescuing” a turtle crossing the road and releasing it a few miles away, the steady erosion of the viability of many populations in Connecticut is evident.

The low-lying sections of the state also have been subject to the most intense development, further challenging the survival of this species. Connecticut law limits possession of box turtles to a single animal, however box turtles cannot be collected from the wild within Connecticut.

Box turtles are a Connecticut “Special Concern” species, and in 1994 were placed under international trade regulatory protection administered by CITES. The box turtle is of conservation concern in all the states where it occurs at its northeastern range limit, which includes southern New England and southeastern New York.

DEEP “Year of the Turtle” (2011) in Connecticut announcements: