There are a number of reasons why it may take a while for your home to get power back after a storm, including whether your home can be restored with a lot of other homes all at once, how fast the wind is blowing after a storm, and even whether or not you have a special need, according to First Selectman Jayme Stevenson.

At Monday’s Board of Selectman meeting, Stevenson took several minutes to explain how first responders, Department of Public Works crews and utility crews approach the cleanup after a storm and the restoration of power to local customers.

Here’s how Stevenson described it, in her own words (without quotes): 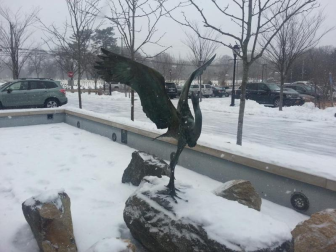 This photo of the heron statue at Darien Library is from the library’s website (from before February 2016).

I just want to remind everybody, as we are on the eve of, yes, another March snowstorm — hopefully it won’t be as bad as the last one — [that] a little movement in the storm here or there can make a big difference.

Generally, people in town have been incredibly patient with regard to getting their power restored, and I just wanted to remind people of the [power restoration] process — and this storm was an excellent example of the damage that heavy snow and high winds can do throughout town, bringing down branches, trees, snapping utility poles, damaging transformers.

The very first part of the response effort on the part of our emergency operations team, in collaboration with Eversource, is to go out and take care of the emergency situations. Any time where there’s a life-safety issue with live wires that would be accessible to people, to cars, [with] power lines on houses, utility poles on cars (these things happen routinely with storms like this), the first part of this is called the “Make Safe,” and any Eversource resources that we get in town — and we have a very good relationship with Eversource — and we have a dedicated liason with the town of Darien. He works very closely with the Emergency Operations Center; we’re in constant communication.

The [Make Safe period is the] very first order of business — no restorations happen until the town is made safe.

After the town is made safe, we then move to the process of clearing roadways of downed trees and wires. Some of that happens in the Make Safe and some of it doesn’t.

If, for example, a roadway is a cul-de-sac or a dead-end road, or there’s enough damage in various places where emergency vehicles cannot access homes or businesses, those become the priority locations for Eversource to work hand-in-hand with our DPW to do the cut and clear.

Sometimes you’ll find that the utility grid has to be de-energized for a while to have that work actually happen safely for all of the people — the DPW workers and Eversource workers — to be able to do that.

Once we do the cut and clear, Eversource resources come back and start the restoration efforts.

They start their efforts with restorations that will bring back power to the largest number of Eversource customers first, and then work their way down, so sometimes there are people who are impacted who routinely end up at the end of that list, because they’re one person on a roadway. […]

That’s a single-serve event, and they will always fall to the bottom of the priority list because the priority is to bring back [electricity to] as many people as quickly as possible.

So what I find, anecdotally, is that that process with storms like this last one routinely take at least three days:

Storm happens — that’s Day 1. With the last two storms that we had, utility crews were prohibited actually from responding, other than to life-safety issues, because of high winds.

The same applies to our emergency responders, although I will tell you that our responders will put themselves in harms way to try and save the lives of our residents, but when winds exceed 30 mph, typically emergency responders and utility workers get pulled off the roads. That did happen with Eversource this past storm.

That takes about three days, which is about the time limit of people’s patience to live without power, so it’s fairly well-known that on Day 3 the first selectman’s phone starts ringing off the hook.

But I just thought it would be a great opportunity to remind everybody of that process. The process cannot really happen any faster than it does because of the incredible danger that’s associated with clearing wires and trees, from both the utility and public works perspective.

So with that, I’m going to hope that we don’t have any of those problems with this coming snowstorm.

You can watch Stevenson talk about power restoration in this video of the Monday, March 12 Board of Selectmen meeting. Stevenson’s comments on restoration begin at the 10:08 mark and end at 15:24 in the video.

Starting Tuesday to Wednesday, overnight, here’s the Darien-specific forecast for the next few days, from the National Weather Service (note that winds are expected to gust to as much as 36 mph on Wednesday night when rain, if it comes that night, could turn to snow or sleet):