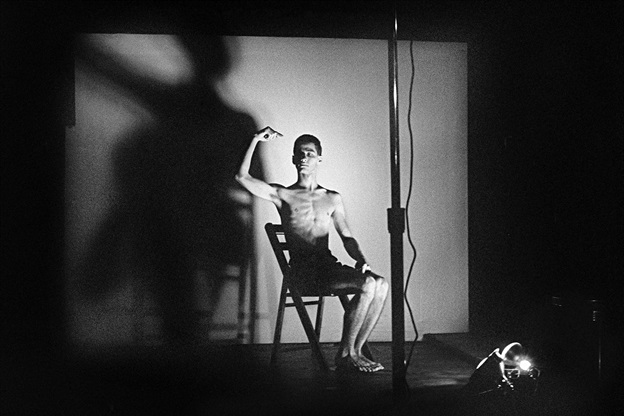 Get a sneak preview of the latest hit exhibit from the Museum of Modern Art. Club 57: Film, Performance, and Art in the East Village.

The East Village of the 1970s and 1980s continues to thrive in the global public’s imagination. Located in the basement of a Polish Church at 57 St. Marks Place, Club 57 (1978–83) began as a no-budget venue for music and film exhibitions, and quickly took pride of place in a constellation of countercultural venues in downtown New York fueled by low rents, the Reagan presidency, and the desire to experiment with new modes of art, performance, fashion, music, and exhibition.

A center of creative activity in the East Village, Club 57 is said to have influenced virtually every club that came in its wake.

Club 57: Film, Performance, and Art in the East Village, 1978–1983 is the first major exhibition to fully examine the scene-changing, interdisciplinary life of this seminal downtown New York alternative space.

The exhibition will tap into the legacy of Club 57’s founding curatorial staff—film programmers Susan Hannaford and Tom Scully, exhibition organizer Keith Haring, and performance curator Ann Magnuson—to examine how the convergence of film, video, performance, art, and curatorship in the club environment of New York in the 1970s and 1980s became a model for a new spirit of interdisciplinary endeavor.

Refreshments will be served. Want to see the exhibit for yourself? Check out a MoMA pass!

Molleen Theodore is the Lewis B. and Dorothy Cullman Fellow in the Education Department at the Yale University Art Gallery and a lecturer in the Education Department at the Museum of Modern Art. She received her Ph.D. from the CUNY Graduate Center in 2010 with a specialization in twentieth century art, photography, and film studies. Ms. Theodore was appointed critic at the Yale School of Art in 2012.