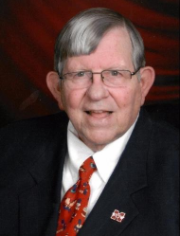 Mr. Harris graduated from Mississippi State University with a degree in chemical engineering. He married his high school sweetheart, Patsy Bullock Harris (Trish) and started to work for International Paper Co. in Moss Point, Miss. all within a two-week period.

Mr. Harris worked at the Moss Point Mill in several supervisory positions for 13 years, and then moved to IPCo corporate headquarters (Pulp & Paper Division) in New York City, where he lived in Darien. After three years, he transferred to Bastrop, La. to work at the IPCo Louisiana Mill where he was director of the Human Resources Department for 8 years.

— an obituary from Moore Funeral Service

He then transferred to the Mobile, Ala. Southern Division of IPCo working as project manager, where he worked until he retired after 34 years with IPCo. Upon retirement, he worked for several engineering companies.

Mr. Harris was president of the Jackson County Republican Party. He attended the National Republican Convention where Gerald Ford was nominated for president.

Mr. Harris was a current member of Cottage Hill Baptist Church where he served as president and vice-president of the Board of Deacons, as well as serving on two separate pastor search committees. He was also the superintendent of the Adult Sunday School Department.

As a youth, he enjoyed spending summers with family and friends at the Hercules Fishing Club, located on the Pascagoula River in Gautier, Miss. He loved Mississippi State Football, hunting and fishing with his sons and grandchildren, traveling and spending time with his family and friends.

The family would like to thank all the people who were involved with his care at Bedford Care Center. The care he received was compassionate and we thank everyone there who cared for him.

Visitation will be Monday, Aug. 7, 2017, at Moore Funeral Home in Hattiesburg from 10 a.m. until the service at 11:30 a.m. Burial will follow in Oaklawn Cemetery.