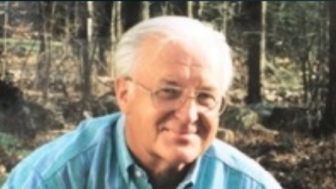 Born June 5, 1930 in New York City, Bud was the son of Edward Parsons Corning and Valerie Ebbets Corning. A lifelong sailor, he grew up in Stamford, CT on Shippan Point, sailing at Stamford Yacht Club and later at Noroton Yacht Club in Darien, CT where he raced in the Ensign and then the Sonar fleets.

Bud attended King School in Stamford, Westminster School and Bard College before entering the family business, the Edward Corning Company, a construction management firm founded by his grandfather in New York in 1898, where his father was then president.

He became secretary-treasurer at the company, which built many school and college buildings, banks, office buildings, YMCA buildings and hospital buildings primarily in New York and Connecticut.

He then entered the insurance and estate planning business, first at Home Life Insurance Company of New York, where he earned membership in the Million Dollar Round Table, and later as an independent agent. He derived great satisfaction from ensuring that families would be well taken care of, in unforeseen circumstances.

He enlisted in the Organized Reserve Corps (ORC) and served in the army reserve, being promoted to sergeant E-5 in 1952.

He married Joan Halloran in 1956 in Darien, where they raised their children and lived for the next 58 years.

A talented artist, Bud painted watercolors and showed his works at the Rowayton Arts Center and was a blue ribbon winner in the Darien Art Show for a scene of Five Mile River. He loved sailing, tennis, and skiing. He joined Silvermine Golf Club and enjoyed playing golf in his retirement years.

Known for being a great storyteller, he regaled both children and adults with tales both imaginative and true including sound effects and character impressions. He was a kind and gentle family man of great integrity. He told his two children, Libby and Ted more than once, “The best decision I ever made was to marry your mother!”

He was predeceased by his beloved wife Joan. A loving father, grandfather, brother and uncle, Bud is survived by his daughter, Libby DeMille of Cape Elizabeth, Maine, his son Ted Corning and wife Sandy of East Greenwich, Rhode Island; and his grandsons, Nate Corning of Boston and Andrew Corning of Seattle. He is also survived by his sister Susan Mann of Walpole, Massachusetts, and two of her three children. A private family gathering and burial service was planned at Greenwood Union cemetery in Rye, New York.

Memorial donations may be made to the Alzheimer’s Association.

— an obituary from the Carpenter-Jenks Funeral Home and Crematory, where online condolences may be left