Edward G. “Ted” Ballard, Jr. of Needham, Massachusetts passed away suddenly at Massachusetts General Hospital on Oct. 30, 2022, surrounded by his loving family and leaving to mourn many other dear family and friends. 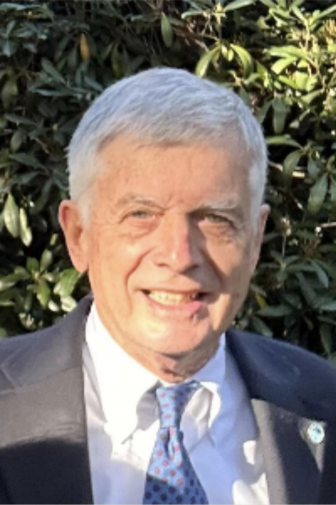 He was affectionately known as “Ted,” “Teddy,” or “Bones” and is survived by his wife, Kathie, three sons, Will, Michael, and Phillip, and sisters, Lynn and Holly.

Ted was born in Nashville in 1945. He spent his childhood in Oil City, Pennsylvania, Larchmont, New York, and teenage years in Old Greenwich. He graduated from North Yarmouth Academy in Maine, where he had spent his summers with family. He served in the Army Reserve from 1968 to 1974 and graduated from American University with a B.S. degree in 1972.

Ted was accepted into a training program at Manufacturers Hanover Trust (succeeded by Chemical Bank, then JPMorgan) in 1974 and sent to Los Angeles to open the bank’s first corporate office outside New York. After the bank sponsored his graduate studies at Stanford, Ted went on to open another office in San Francisco before returning to the East Coast to be closer to relatives.

After a few years in Darien, Ted and Kathie moved their young family to Needham, where he began a second career in commercial real estate, spending nearly a decade ranked among the highest performers in the Boston market. Ted ultimately returned to financial services at State Street Bank and Trust in 1998.

Ted gave generously of himself to his loved ones and strangers alike. Upon retirement, he donated his leadership and sales skills to nonprofit endeavors at the Needham Community Council and Needham 300 (tricentennial) where he led fundraising activities. Through Needham Cares, he participated in rebuilding homes in Louisiana and Mississippi after Hurricane Katrina.

Ted was a beloved “man-about-town” in Needham where he coached youth soccer and lived with his family for 36 years. He enjoyed tennis, boating and music (especially jazz), spending time in Wilmington, North Carolina, visiting his sons in New York and Los Angeles, and Thursday evenings with his tennis buddies at Dunn-Gaherin’s, his favorite watering hole.

In lieu of flowers, donations may be made to Needham Community Council, 570 Hillside Ave., Needham, MA 02494.

— an obituary from John C. Bryant Funeral Home, as published on Legacy.com, where online condolences may be left