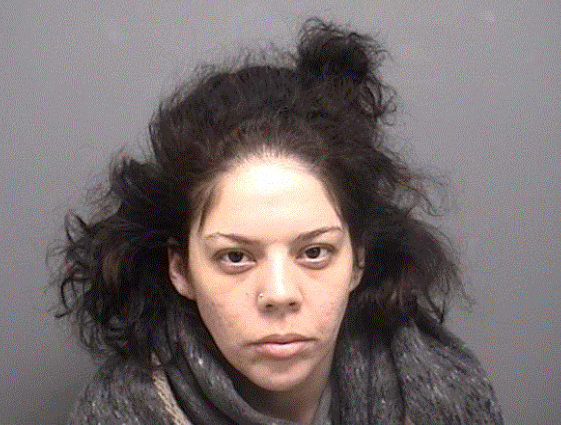 A 30-year-old woman who had been driving while on drugs the day after Christmas was stopped by Darien police again on Jan. 5 after speeding and swerving between lanes on the Post Road, then charged with driving while under the influence, police said.

In between her Darien arrests, she was arrested by Stamford police on shoplifting charges.

The next day, after Darien police had released her on a bond, she was shot in the leg in Stamford, Darien police said. The Stamford Advocate reported that, according to Stamford police, a woman was recuperating in a hospital after she was shot Friday, Jan. 6 — you could call it the 13th day of Christmas.

Stamford police had not released a description of the shooting incident, but in Stamford police dispatches, the newspaper reported, they “indicated that the shooting may have been an accident that occurred when the victims and the shooter were high on the synthetic hallucinogenic drug PCP, known as Angel Dust.”

The woman, who was acting strangely in both of her encounters with Darien police, had told police on Dec. 26 that she was high on PCPs.

Darien police described each Darien incident with these accounts (including accusations not proven i court):

At 12:30 a.m., a police officer saw a red Honda Accord, with the engine running and the lights on, in the parking lot of the Mobil gas station at 211 Post Road, although the station was closed.

The officer passed by the vehicle twice and then decided to see what the driver was doing there, because there had been several recent incidents of motor vehicle burglaries in the area, including just across the street.

A check of the car’s license plate showed that it was registered to Joanna Jack of Hope Street in Stamford. A records check also showed that Jack was wanted on an arrest warrant for first-degree failure to appear in court.

She seemed to forget where her purse was and got out of the car, saying it was in her trunk. She searched there, didn’t find it and went back to the driver’s side of the car and finally got her purse from behind the front passenger seat.

The officer noticed Jack’s eyes wide open and at times with a blank stare. She asked several times in a panicked tone why the officer needed her license, again saying she did nothing wrong. The officer mentioned the recent nearby overnight larcenies from cars.

The officer asked her to step out of the car again, but she locked the door and began closing the window. By this point, more police officers had arrived on the scene. One officer grabbed Jack’s window and held it down, telling Jack that it would break if she kept trying to close it.

The officer reached in the car and turned it off, removing the keys. After that, Jack refused more than once to leave the vehicle. Police forced her out, while she began yelling and hanging on to the passenger seat.

Once out of the vehicle, she resisted efforts by police officers to put her in handcuffs.

A search of the car revealed a blunt — a cigar — near the brake pedal on the floor, and a police officer reported smelling a strong odor consistent with PCPs coming from that area. Also on the floor was a small amount of a green, leafy substance consistent with marijuana, sometimes smoked in cigars along with PCPs.

Jack complained about difficulty breathing and said she was having an asthma attack. Darien EMS-Post 53 was called to the scene, and even before they arrived, officers began giving her oxygen.

Police later found three small folds of aluminum foil on the floor of the police patrol car where Jack had been. The foil contained a material with a strong chemical smell consistent with PCPs and which later tested “presumptively positive” as PCPs.

After several hours at the hospital, her mood then changed and she became extremely combative. After several hours, she was released back to police custody. While her arrest was being processed at Darien Police Headquarters, she said she didn’t recall anything because she was high on PCPs.

Jack was charged with possession of narcotics, possession of drug paraphernalia and resisting arrest. She was held on $2,500 bond for the Darien charges and a $10,000 court-set bond for the earlier charge of failure to appear in court.

According to a Stamford Advocate report last updated on Saturday, Jan. 7 and based on police statements:

Jack was charged with shoplifting from a CVS Pharmacy on Hope Street at about 4 p.m. on Wednesday, Jan. 4.

She had fled the store and got in a Honda, which police stopped. She initially locked the doors and refused to get out.

A store manager told police she had opened several sealed boxes of cosmetics and was trying them on while standing in an aisle of the store.

Several months ago, Jack had brought a device into Stamford Police Headquarters, saying it was a bomb that she had run over in her car.

According to Darien police:

The next time Darien police came into contact with Jack was at about 4:30 p.m., when a police officer on stationary duty watching traffic on the Post Road near its intersection with Hillside Avenue saw a red Honda Accord speed past him.

The officer started following the car, which went as fast as 55 mph on the road, where the speed limit was no more than 35 mph. The officer followed the car but didn’t catch up to it until it was almost at Interstate 95 Exit 11 on the Post Road, and stopped it near the Post Road intersection with Thorndal Circle.

Before stopping the car, the officer saw it weaving back and forth between the right and left eastbound traffic lanes.

The driver, Jack, told the officer she was headed to Norwalk to get her hair fixed. She had extremely slurred speech and her eyes appeared to be closing when the officer spoke with her.

The officer noticed that the car had extensive damage and asked Jack what had happened. At that point, she was manipulating her hair as if she was trying to take something out of it. She repeatedly tried to get something out of it and wouldn’t respond to any of the officer’s questions.

Other officers arrived and asked Jack to get out of the car. Jack was extremely unsteady on her feet when she did so, and had to lean on the vehicle. She said she hadn’t been drinking any alcohol, but she had taken four different prescribed medications. She said she didn’t use any illicit drugs.

When she tried to explain what those medications were, the officers couldn’t understand her because she was slurring her words so badly.

Jack was given field sobriety tests, which she didn’t properly complete. She was charged with driving under the influence. She repeatedly asked why she was being arrested and insisted that she had done nothing wrong. While handcuffed, she pulled her left hand partly out of the cuff, causing a minor scratch on her left wrist.

At Darien Police Headquarters, she was asked to take a urine test but refused. A refusal after a police charge of driving while under the influence can result in stiffer penalties from the state Department of Motor Vehicles.

While there, she admitted to falling asleep at the point where the police officer had pulled her over. She was later released on $250 bond and is scheduled to appear Jan. 18 in state Superior Court in Stamford.

Sometime Friday night, she was shot, Darien police said. At 8 p.m. a Stamford woman who was shot was taken to Stamford Hospital, according to a Stamford Advocate report. The newspaper also reported that Stamford police were looking for the suspect’s vehicle — a red Honda.

Editor’s note: This article originally was published at 3:14 p.m., Monday. The time stamp was changed to keep it at the top of the Tuesday newsletter.