A 34-year-old man was driving intoxicated when his vehicle got into a minor traffic accident with another vehicle shortly before 1 a.m. Monday (today), police said.

After police arrived and began speaking with him, according to the police account, the man got angry and started walking back to his car, police told him to stop. When he didn’t, he was forced to the ground and taken into custody. 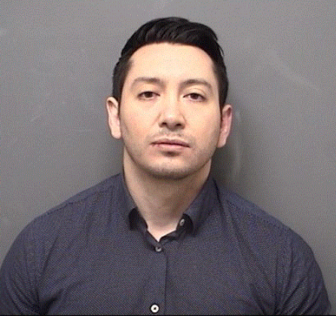 Arrest photo of Jose Zuniga, 34, charged with driving while under the influence and interfering with a police officer.

At 1:03 a.m., the two-vehicle accident on Leroy Avenue near the Post Road was reported to police.

Jose Zuniga of Osborne Avenue in Norwalk was driving with three passengers. At first, he told police someone else was driving, but when police questioned others in the car, they determined that Zuniga was the driver.

While he was outside the vehicle, talking to police, one of the occupants of his vehicle called him. Zuniga began yelling angrily into the phone and walking toward the person when police, several times, told him to stop. He was brought to the ground and charged with interfering with an officer.

Police saw that his eyes were glassy and bloodshot and he smelled of an alcoholic drink. He was charged with driving while under the influence and taken to Darien Police Headquarters, where he refused a breath test. The police announcement didn’t say whether or not he was tested for sobriety at the scene.

His bond was set at $500, which he paid. He is scheduled to appear April 5 at state Superior Court in Stamford.