You may find yourself delayed by closed lanes at certain stretches of Interstate 95 this week, and if you’re flying from LaGuardia airport for the holiday, you may find your airline is at a different terminal.

Here’s what you should know:

As Darienite.com reported on Friday, a project in Stamford between Exits 8 and 9 will cause lane closures on both the northbound- and southbound-traffic sides of the highway, but the state Department of Transportation is now saying that work will close lanes anywhere from Exit 8 in Stamford to Exit 10 in Darien in connection with bridge maintenance and inspections.

Closures can be expected anywhere from 9 a.m. to 3 p.m. on both Monday and Tuesday, Dec. 4 and 5, the state Department of Transportation says.

On Wednesday and Thursday, Dec. 6 and 7, work on the Old Kings Highway North bridge will at some points close lanes for both northbound and southbound traffic from 9 a.m. to 3 p.m. between Exits 12 and 13 in Darien on both sides of Interstate 95, ConnDOT says.

Lane closures traditionally are meant to take place when commuter traffic is lighter, but as we all know, traffic is hardly ever light from early afternoon onward for the northbound traffic lanes in town. And shoppers will be on the highway.

Surveying on the Merritt Parkway in Norwalk will take place on weekends, Dec. 9-10 and 16-17, and that may result in lane closures for southbound-traffic lanes anywhere from Exit 41 to 40A, ConnDOT announced. The regular work schedule will be from 6 a.m. to 2 p.m. (The project started this past Saturday.)

If you’re driving on northbound lanes at the New York-Connecticut border, expect lane closures on I-95 just as you pass into Greenwich, anytime from 9 p.m. to 5 a.m., Mondays through Fridays for the next two weeks: From Dec.  to 15, ConnDOT says. Maintenance on the highway bridge over the Byram River is the reason. (That bridge is officially “No. 00001” in Connecticut.) Expect lane closures as far as Exit 2.

Beginning Saturday, Dec. 9, 2017 all airlines operate from their new terminal locations, highlighted in the below chart. 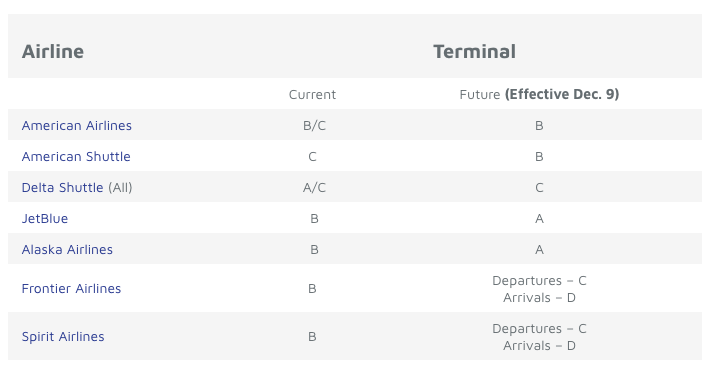