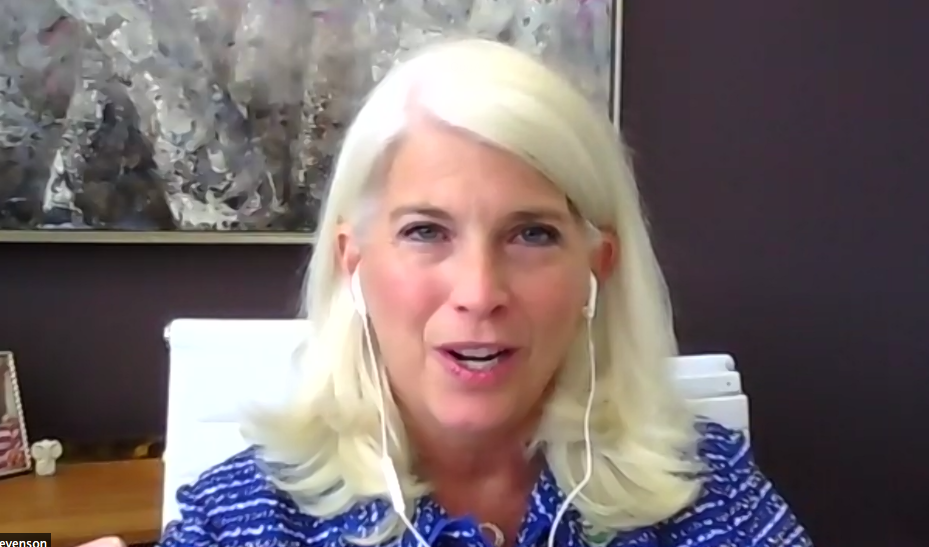 Image from the video

Darien police have longstanding policies that already meet some of the calls for policing reforms since the death of George Floyd, First Selectman Jayme Stevenson said in an online talk given Tuesday morning.

“We all have a lot to learn,” Stevenson said. “And I would just like to ask all of you to be respectful, to listen to others viewpoints on things.

“I’m distressed to see the degradation of dialogue that’s happening around this particular issue in our community right now, and I think we have a great opportunity to be the awesome community that we are by listening to everyone and educating ourselves and making sure that the changes that come reflect the values that we all hold dear here in our town.” Stevenson didn’t elaborate further about the degraded dialogue.

Stevenson’s comments were a small part an online talk Tuesday morning mostly about how the town is coping with the COVID-19 epidemic. 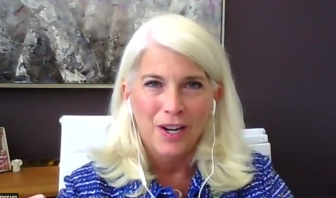 Image from the video

She spoke in an online “Coffee and Conversation” through Zoom.com, organized by the Darien Chamber of Commerce for its members. The meeting started at about 9 a.m. and lasted for almost an hour.

Stevenson said Darien Police Department has long had policies (part of its written “general orders” to Darien police) that bar chokeholds, insist that police intervene if fellow officers are putting people in danger, mandate the use of body cameras and that comply with some of the most widely publicized police reform ideas, including the “eight that can’t wait” from the Campaign Zero group.

“I’d like to give all of you at least some assurance that Darien is well ahead of the curve,” on maintaining professionalism among police officers to deter racist and brutal acts, she said.

Stevenson said she’s been educating herself more about the race and police issues being discussed nationally, and the YWCA Darien/Norwalk is planning future events around the topics.

Chamber President Susan Cator ran the meeting and asked questions submitted by participants after Stevenson spoke about the epidemic. The last question was about Darien and the national discussion following Floyd’s death.

The question Cator read from an audience member said, in part: “Can you speak to what Darien is doing to combat systemic racism and police brutality? […] So Jayme, would you like to speak about that?”

Here’s Stevenson’s response, as recorded by Darienite.com, followed by brief comments from Cator (where noted below, a few words weren’t intelligible as broadcast or recorded):

I would love to speak about that. This is probably a great topic to hold another “Coffee” which I would be delighted to participate in. It’s certainly difficult to handle this topic in just a couple of minutes, so we want to make sure that we give it our due.

I believe strongly that America is at a new tipping point in relation to racial injustice in the wake of several highly publicized police killings of people of color including George Floyd but certainly not limited to George Floyd.

But George’s death — murder — at the hands of Minneapolis police has ignited a fire in people of all colors across our country.

Police accountability and de-escalation/use of force policies are really at the heart of the concerns of America. Although some are calling for the defunding of police agencies and also eliminating the legal protections for our police officers under a legal standard called “qualified immunity.”

Last Monday, the [U.S.] Supreme Court decided to not re-examine qualified immunity for police and other government officials, which I know has caused great consternation across the country.

Many of the police reforms that folks are asking for are rooted in the recommendation that came from something called “Campaign Zero.”

And actually, you may have seen it, widely publicized, called “the eight that can’t wait,” eight policies that have to be addressed at this point in time. And I won’t go through them all but it’s about banning chokeholds and strangleholds and the duty for other officers, by-standing, to intervene, and of course, comprehensive recording.

So right now, one of things we are doing, police leadership are doing, is holding a series of educational opportunities and conversations.

Last week, I invited the organizers of the Black Lives Matter march to come and meet with the chief and his captains and the police commissioners, and we had an amazing two-hour dialogue, and we’re not done yet, because these young men came with brilliant questions and we’re going to take time to answer each and every one of those.

So, it’s important for us to make sure that people understand the level of service that we get specifically from the Darien Police Department. And what was very illuminating for me in my research and learning is that police departments don’t operate on the same policy platform.

You might recall that the governor issued two weeks ago an executive order that imposed certain mandates on the state police in Connecticut. All of those mandates in that executive order are things that our Darien Police Department has already in our general orders. It’s normal course of business for us.

So I think there’s a great opportunity for the state of Connecticut to make sure that there’s a common policy platform that can include police reforms certainly, but I’d like to give all of you at least some assurance that Darien is well ahead of the curve, and we have police leadership right now that has a zero tolerance policy [“about bad policing”? The recording was unclear — Darienite.com]

So I am comforted by that. We have a lot to learn. I have a lot to learn. And that is my posture right now, you know. I’m out making political statements and things, because I need to learn a lot. I’m going to join the Noroton Presbyterian Church in a real deep dive into the issue of racism.

I think Judy Phillips is on this call today. The YWCA of Darien is doing amazing work in this space and collaborating with agencies across our town to address this issue. There’s going to be public programming that will come. I think the schools are going to take up some — the issue of curriculum changes to address racial injustice, so it’s a pretty grassroots and very, sort of systemic endeavor right now.

We all have a lot to learn. And I would just like to ask all of you to be respectful, to listen to others viewpoints on things. I’m distressed to see the degradation of dialogue that’s happening around this particular issue in our community right now, and I think we have a great opportunity to be the awesome community that we are by listening to everyone and educating ourselves and making sure that the changes that come reflect the values that we all hold dear here in our town.

I started a couple of months ago this process of defining a community values statement. It sure would be helpful at this point in time if we had one, so I’m going to really [re]start that effort, hopefully the other town boards will re-engage with me on that and I’d like to ask for support from the community to join me in that effort.

If we can define our guiding principles, we will all be that much better off in the decisions we have to make going forward.

Thank you, and the chamber would like to be supportive in that effort, Jayme, so keep us posted on where it goes and what we can do to help.

And Judy [Phillips] [executive director of the YWCA Darien/Norwalk] has shared to the group, attendees in the chat, more information on what they have going on and in taking their leadership position in helping all deal with this movement, locally and in the county and regionally.