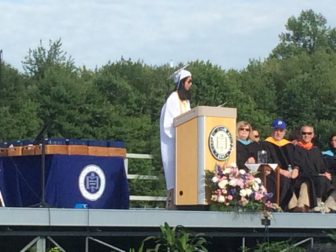 On behalf of the rest of the Class of 2016, I would like to thank the faculty, staff, and teachers of Darien Public Schools, who have helped us transform from kindergarteners who once ate paper (you know exactly who you are) to more mature young adults about to receive the most important slip of paper, a diploma.

I’d like to extend that gratitude to all the parents and friends, whether present or absent today, who have guided us thus far and will continue to serve as our anchors. And of course, I would be the worst co-salutatorian in history if I failed to congratulate the Class of 2016 before me. We’ve made it, and I am so proud to be graduating with you all.

I must also take a moment to confess that this is by far the hardest assignment that DHS has ever given me. I’m not kidding … ask any of my friends and they’ll tell you that I’m not even remotely qualified to share any wisdom with you. Yet here we are.

While brainstorming some starting points for this, I felt as though I were drowning in a sea of clichés that seemed to only superficially capture what this day actually signifies. Every draft I composed felt like a chapter from a regurgitated self-help book:

“Actions speak louder than words. Everything happens for a reason. Savor the little things in life. Look forward, but don’t forget where you came from.”

None of those above phrases are really my words. They don’t belong to me. They evoke feelings and thoughts that I’ve certainly felt, but these catch phrases are so overused that they have become white noise in the backdrop of daily life. It seems like everything new and original has already been said and spent. 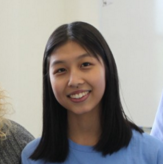 To where has this originality disappeared? Why is creativity such a difficult quality to seek out? Why are we surrounded by imitation?

Since my first day of high school, I’ve taken lessons in painting. I started off imitating the Impressionist masters, copying Monet’s Garden and attempting to capture all the contrasts in Singer Sargent’s portraits.

And then I went so far as to try to mimic the movement hidden in Renoir’s landscapes before I realized that in all the hours I spent studying their works, I had never developed my own style. I borrowed some Van Gogh and stole a little Cezanne to the point that none of the paintings hanging on the walls of my house felt like they were truly mine.

I’ll be the first one to admit that I’m an amateur, but I only work from photographs now. I made this decision not because there is nothing to gain from the masters, but because I felt that I had learned enough of the basics from them to explore on my own.

What we, as members of the Class of 2016, have gathered over the past 12 years runs parallel to those fundamental art skills, although they are so much grander and pour past just the canvas. The next steps are to take what we know, to develop our own brushstrokes, and to just run with it.

Eventually, isn’t it more exciting, interesting, and fulfilling to just experiment a little?

The same holds true even for those subjects we consider to be less creative. Three years of ASR, the science research course offered here, have taught me that every field needs crazy people who think outside the box and make leaps over chasms that no one else has dared to do.

— Stop painting what has already been painted. Come up with your own maxims. Bend the rules (not the laws, though. Please don’t do that).

Traditional methods may not be enough to result in breakthroughs and progress relies on radical approaches and risks. The truth is, wherever your niche may be, creativity and a spark of brilliance will always lie at the root of those successes.

I’m not here to tell you or to deny that each of you is original and unique, because we’ve grown up hearing that. Nor will I remind you to “be yourself”, because that’s plainly unnecessary.

Instead, I urge you to test the limits of thoughts and possibilities. Stop painting what has already been painted. Come up with your own maxims. Bend the rules (not the laws, though. Please don’t do that).

I challenge you, Class of 2016, to take the Darien experiences and what you have learned to new, creative heights that have not yet been reached. I dare you to think outside the box, to be avant-garde, and to stand at the vanguard of originality, because I promise that you have the tools and the faith to do this.

Thank you. And once more, congratulations to the Class of 2016!