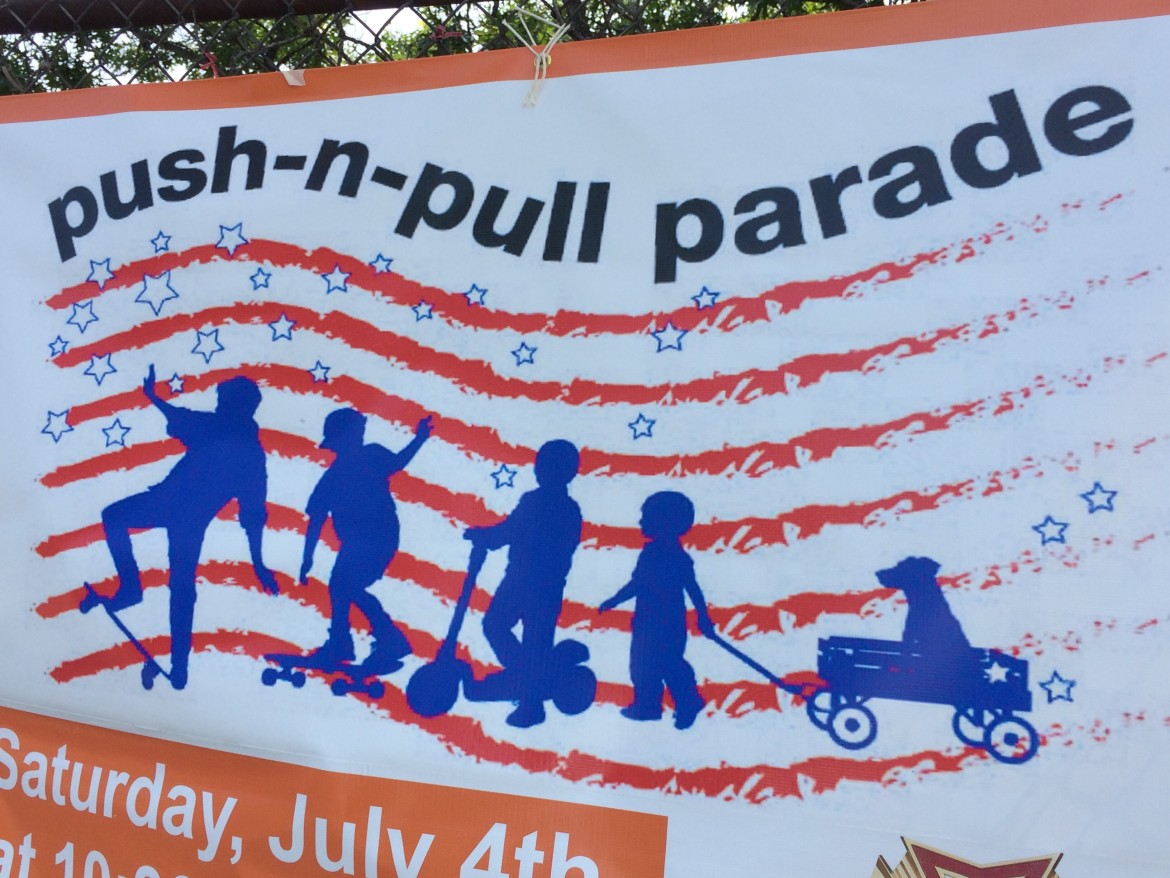 If you can pedal it, push it, ride it scoot on it or otherwise roll it — or even just walk — you’re invited to join the annual Darien/Norwalk Push-n-Pull Parade on Saturday in downtown Darien.

It’s free to join (although this year’s new sponsor, the Darien VFW Post 6933 is asking for donations for its building). You do need to be ready at the parking lot of Goodwives Shopping Center on Old Kings Highway North at 10:30 a.m. sharp on Saturday, July 4. Organizers suggest you arrive at the parking lot by 9:45 a.m.

Your vehicle, if you have one, will need to be non-motorized if you want it in the parade.

There will be music at the parking lot, which may help keep some kids from getting too antsy. Local and state elected officials are expected to be marching, along with Uncle Sam, played by Joe Warren of Darien. Trucks from all three town fire departments will also be in the parade.

Before the marching, there will be a contest with winners named in various categories, including the best decorated vehicle with wheels (such as a tricycle, bicycle, scooter or wagon), best decorated float, and a “most patriotic” dressed family. Winners, who will be announced at 10:20, get to march at the head of the parade as “Honorary Grand Marshals” along with Uncle Sam and the elected officials. 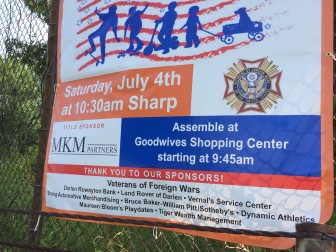 From the Push-n-Pull Parade poster at the corner of Noroton Avenue and Ledge Road.

Here’s the news release from the Darien VFW:

To the delight of many local children and families, Darien VFW Post 6933 is proudly hosting the eleventh annual July 4th Push-n-Pull Parade, after the YWCA Darien/Norwalk graciously passed the torch for this lovely event to Darien’s own VFW Post.

In keeping with what has now become an annual tradition for Darien, the patriotic parade of children riding bikes, scooters, wagons and non-motorized vehicles will step off from Goodwives Shopping Center with a start time of 10:30 a.m. sharp.

Families are encouraged to arrive at Goodwives Shopping Center from 9:45 a.m., where Mary Ann Hall’s Music for Children will entertain the waiting crowd before kick-off.

The title sponsor for this year’s event is MKM Partners, a growing Stamford-based institutional research, sales, and trading firm with multiple offices around the country, that provides fundamental research, macro insights, trading capabilities, and a variety of other products/services to mutual funds and hedge funds across the globe. Steven Messina, firm President, and Ken Fiveson, a Managing Director at MKM, both residents of Darien, helped organize this sponsorship opportunity.

The Post’s Color Guard will lead the parade with local and state elected officials. The parade, which last year drew close to 2,000 residents, will also feature a special appearance by Darien resident Joe Warren as the beloved Uncle Sam and fire trucks from the Darien, Noroton and Noroton Heights Fire Departments.

All vehicles must be non-motorized. Winners of the contest will be announced at 10:20 a.m., and they will lead the parade as Honorary Grand Marshals with Uncle Sam and local dignitaries.

The parade travels down the Post Road and ends in Tilley Pond Park, where there will be food vendors and live entertainment by the Ray and Jay Band. There will also be a number of children’s activities taking place there, including face painting and a selection of removable children’s tattoos.

This event is free and open to the public, with a suggested donation of $10 per family payable at Tilley Pond Park to benefit the Post’s current restoration of the former Chapel of Fitch’s Home for Soldiers and their Orphans (the first veterans’ home in the U.S. that was established right here in Darien just after the Civil War).

The Chapel is the Post’s headquarters at 205 Noroton Avenue, and we encourage you to stop by to visit us so we can show you around.