The 23-year-old Darien resident is among 3,300 people each year who try to walk the entire length of the Appalachian Trail, from Georgia to Maine. But she’s one of the 25 percent of them who complete the task. 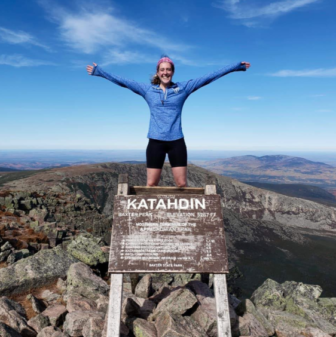 Diana Jackson at trail’s end: on the peak of Mt Katahdin

She learned to hike with her parents in the White Mountains of New Hampshire. When she was 7, announced her goal of making the entire trek. Her parents humored her, but upon graduation from Wellesley College in 2018, she got serious and spent six months in preparation.

“I have a tendency of psyching myself out,” she says, so she didn’t read too many books about the dangers of the adventure. But she did drop a lot of money on a tent, sleeping bag and the first of four pairs of hiking boots — each replaced as it wore out.

She started in late March south of Springer Mountain in Georgia. On her first night, she endured a soaking rain. Crude shelters are maintained by volunteers along the trail, but they are first-come, first-serve and the early spring nights were as cold in Georgia as the October nights when she finished in Maine.

If she was lucky, she’d find a hostel just off the trail where she could get a bunk for $25 a night. But most nights, her dehydrated dinners heated over a camp stove were her cuisine of choice. Her trail name was “Little Debbie” in homage to her favorite snack. But over six months, she lost 40 pounds.

Her backpack weighed 45 pounds, yet she was able to average about 20 miles of walking each day.

In most places, the AT is described as “the green tunnel,” but in others, there are serious mountains to climb and rivers to cross (some without bridges). She relied on an app called Guthook, named after a hiker, that used GPS to keep on the trail and leading her to drinkable water, shelters and hostels. At least once a day, she could find a cell signal to let her family know where she was and how she was doing.

Twice she suffered injuries, falling face first and hurting her knee. She was all alone and without her usual first aid kit so she just kept going, “pushing through the pain” until she could find help.

By the end of October, she could see her goal in sight: 5,267-foot Mount Katahdin in northern Maine, the end of the AT. But it took her a couple of days to reach the summit, alternately crying, laughing and filled with joy. Her parents joined her for the final climb, though she put them on a slightly easier trail.

After the victory came the inevitable letdown, but also some important life lessons.

“I had always doubted myself,” she says. “But now I know I can do anything.”

She’s no longer jealous of classmates with high paying jobs.

“I can join the corporate world anytime, but now, when I’m young, is the time to live this dream,” she said. “The trail is the happiest place for me.”

As well as the beauties of nature, she misses the camaraderie of her fellow hikers.

She’s already setting her sights on a new goal for 2021: Walking the 2,600 miles of the Pacific Crest Trail from Mexico to Canada.