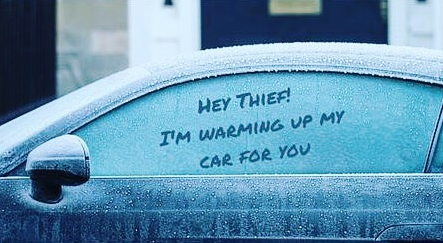 We know the frigid weather is on its way, but never leave your car running while unattended.  With the cold gripping much of the nation, thousands of drivers are starting their cars and leaving them idling for a few minutes while they warm up on cold mornings.

— an announcement from Darien Police

It’s a bad idea even if you are planning to make just a quick stop somewhere. Many vehicle thefts are crimes of opportunity, and a person could decide to make off with your vehicle if they see that it is empty and has the engine running. 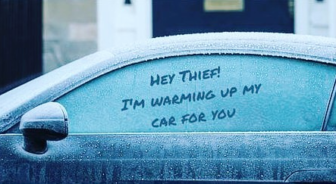 The National Insurance Crime Bureau (NICB) says that one out of every five stolen vehicles had keys in them, while nearly half of vehicles were unlocked when stolen.

According to the U.S. Department of Energy, most of today’s cars do not require more than 30 seconds to warm up.  An idling car can burn as much as a half-gallon of gas in an hour, so turning the car off is more fuel efficient and causes less air pollution.

Did you know you might be violating the law?  In an effort to protect our air, environment and health, the Connecticut Department of Energy and Environmental Protection (DEEP) adopted a regulation in 2004 that prohibits vehicles of all kinds from unnecessary idling for more than 3 minutes. The regulation applies to all “mobile sources,” including all vehicles.

Exceptions are made for the following situations:

If drivers must leave their cars idling, they should have two sets of keys so the car can be locked while running and the extra set can be used to unlock the door when the driver leaves.

Remote car starters also allow drivers to start their cars while locked and require the key be in the ignition before it can even be put into drive, making it harder for thieves to steal.

It’s better to have a cold car than no car.