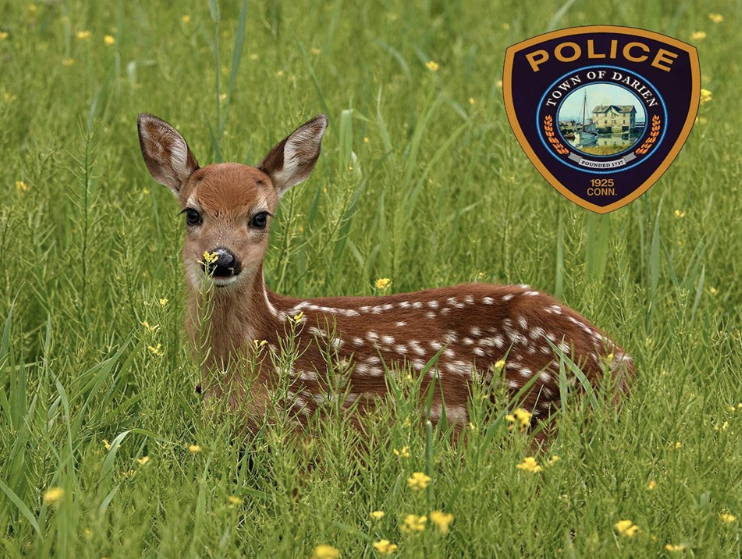 Fawns can seem like they're in dire circumstances — when they're not.

The Darien Police Department and the Darien animal control officer have received a significant increase in calls regarding “abandoned fawns.” Here is information you should be aware of before contacting the police department:

— an announcement from Darien police

The only time a female (doe) will be found with a fawn is during feeding times. Fawns are fed three to four times a day, each feeding lasting only about 15 minutes. During the long periods left alone, newborn fawns instinctively freeze and will lay motionless when approached.

Fawns can seem like they’re in dire circumstances — when they’re not.

According to CT DEEP, If you come across a fawn, it is best to leave it alone for at least 48 hours to determine whether the adult is returning for feedings. While waiting for the doe to return, it is important that both people and dogs stay away from the fawn. A truly orphaned fawn may show signs of distress by walking around aimlessly and calling out for several hours.

Most fawns that are found alone, are not orphaned. Does give birth to their fawns from May through the end of June. The doe will rarely be found near her fawn for the first few weeks of its life because her presence may attract predators.

The fawn is able to hide from predators because it is well camouflaged and has very little odor. Often times, young fawns are found in and around yards. This is not abnormal. If you observe that the animal appears sick or injured, please contact Police Communications at 203-662-5300. Thank you.