State Transportation Commissioner James Redeker recently announced in a letter and news release that proposed fare increases and service reductions would “undo decades of investment in our transportation infrastructure and initiate an economic death spiral for our economy.”

In a letter to Governor Dannel P. Malloy sent on Friday, Connecticut Department of Transportation (CTDOT) Commissioner James P. Redeker provided an update on the recently held public hearings the department hosted and made clear that without action by the General Assembly to fix long-term issues with the Special Transportation Fund, CTDOT will have “no choice” but to raise rail and bus fares and cut transit service effective July 1, 2018. 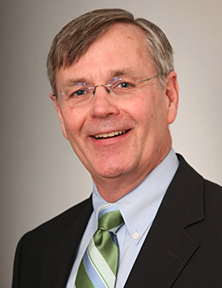 Commissioner Redeker added that he “cannot support” the proposed fare increases and service reductions because they would “undo decades of investment in our transportation infrastructure and initiate an economic death spiral for our economy.”

“However, I may have no choice,” Redeker wrote. “The obvious alternative to these draconian actions is to fully support the revenue needs of the Special Transportation Fund (STF) in this legislative session to fully avoid the fare and service cuts and to restore funding for the critical capital investments needed for our transportation system.”

Over the last several months, CTDOT held seven public hearings and nine community meetings around the state to gather public comment on the proposed changes in fares and service. More than 400 people attended and more than 650 comments were submitted in writing or by email. Virtually everyone opposed the plan; in one case, a petition with 4,625 signatures was submitted in opposition.

Commissioner Redeker outlined several examples of the “enormous harm” the proposals would inflict, including the loss of 6.5 million train and bus trips annually; the inability for many to get to doctors’ appointments, school and work; decisions on buying a home or starting a business in Connecticut; and an annual economic impact of $117.8 million.

“These statistics tell only part of the story. These actions will gut all of the progress made in recent years to provide the options and connectivity for our citizens through the services of Shore Line East, the New Canaan Line, the Danbury Line and the Waterbury Line, as well as bus and paratransit services across the state,” the letter continues.

“I do not support any of the proposed fare increases or service cuts based on their impact on Connecticut riders and our economy,” the letter states. “However, if the Legislature does not act to solve the Special Transportation funding shortfall by mid-May, the Department of Transportation will reluctantly take every step necessary to implement the changes in compliance with the commitments made to support the January 2018 sale of Special Transportation Obligation bonds.”

Without prompt action, the STF is projected to be in deficit by fiscal year 2019, which begins July 1. The 2018 General Assembly session ends May 9.

Redeker’s Letter to the Governor

The letter, dated April 20, was posted on the state Department of Transportation website: 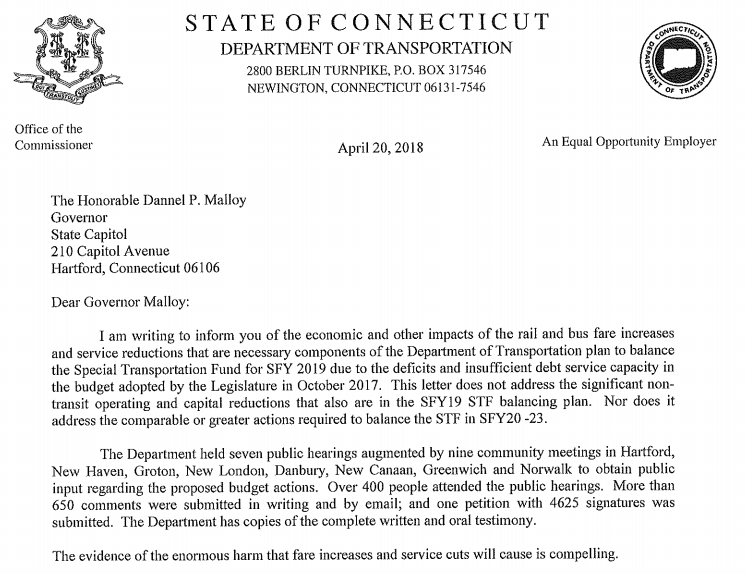 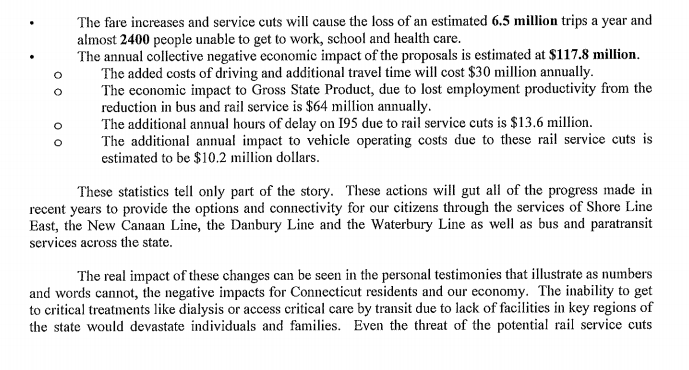 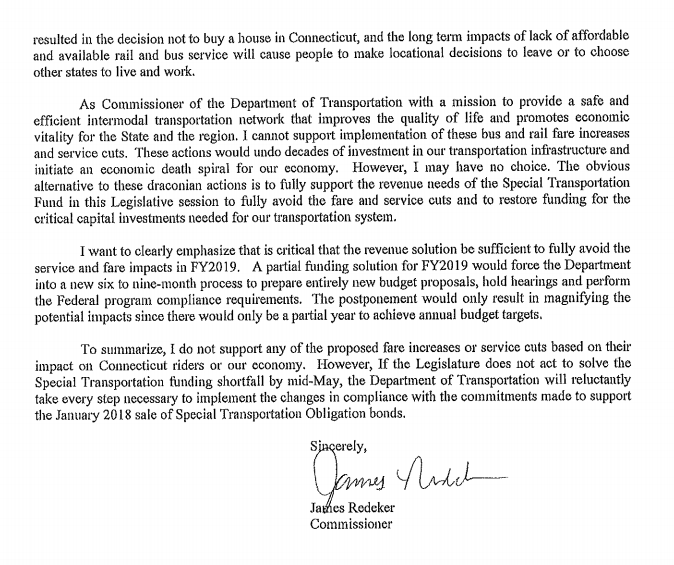