David Genovese of Baywater Properties speaking with people just after his presentation in Town Hall.

Commercial Real Estate Developer David Genovese gave a presentation to the public at Town Hall (and on TV79) Thursday evening, providing some updates on his proposal to redevelop the triangle between Corbin Drive, the Post Road and Interstate 95.

The proposal doesn’t add that much more retail space to the downtown about another 20,000-square feet, Genovese said. And a new street that would run parallel to the Post Road (and that might be extended to Center Street) is something that previous government studies have suggested, he said. 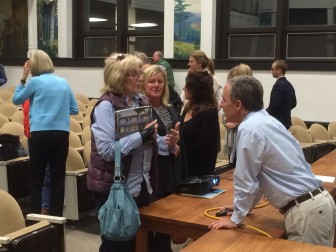 David Genovese of Baywater Properties speaking with people just after his presentation in Town Hall.

Genovese addressed concerns about underground parking, the addition of a five-story building to downtown, the impact on traffic, and whether the new apartments would increase the school-age population. He mentioned some small changes in the proposal and some other ways the idea might be changed before a formal proposal is presented to town land-use boards.

In a meeting attended by about 60 people at Darien Town Hall and covered live on Darien TV79, Genovese also answered questions from the audience, which included a number of people who said they might want to buy one of the condominium apartments in the proposal.

With additional housing, retail space and office space in the triangular tract, some people have been concerned about the additional traffic the development would bring to downtown.

A traffic study controlled by town officials, along with a study the state can be expected to do, will give a clearer picture on how the development would change traffic in the area, Genovese said.

The impact of the new office space on traffic will be minimized a lot by the fact that Darien Railroad Station is the way many office employees already get to and from work, he said.

At 8 a.m. downtown, you can see commuters leave the train station, headed toward the office buildings on Tokeneke Road and Old Kings Highway South, he said. He expects the same pattern with workers in the proposed office buildings just a block or so further away from the station.

The apartments are meant to be attractive to empty nesters and retirees. Genovese said he expects many of the residents will be living out of state for a large part of the year because of Connecticut’s high estate taxes.

The apartments would be condominium units, not rentals, unlike the rental units proposed by the Palmer family and Federal Realty in their downtown Noroton Heights proposals, he said. The units set aside for affordable housing might be rentals, however.

What pays for the park and the underground parking

The five-story office building in the proposal (to be located roughly where the current Darien Post Office stands) adds enough potential revenue for the development to afford two levels of underground parking under many of the buildings, he said.

Building underground parking is very expensive, Genovese said, and without the five-story office building, it would be more difficult to provide parking and provide for the town green-like park about midway between Exit 11 and Corbin Drive, he said.

The lowest parking level could be used by people living in the 80 or so apartments that would be built, many of them on the second and third floors of buildings that had stores on the first floor.

One factor that increases the cost of underground parking is that the water table is about eight feet beneath the surface in that area, Genovese said. When his company had 1020 Post Road built nearby, the basement had concrete walls three feet thick with reinforced steel to keep the water from seeping in, he said.

Some changes and potential changes:

Genovese mentioned these changes to the proposal:

Genovese hopes to get town approval for the redevelopment (which hasn’t been formally submitted for approval yet) sometime in 2016, with construction to start sometime in 2017. It will take about 18 months for the project to be completed, he said, meaning the project wouldn’t end until sometime well into 2018.

This is an initial report. Darienite.com will publish more information from the meeting in a later article or a long update to this one.

Correction and clarification: Some minor changes have been made to this article at 9:37 a.m., Friday: T he reference to people living part of the year out of state has been changed to “much of the year” from “most” (the correction), the number of apartments from “70 or so” to “80 or so” (a clarification) and a comparison of the additional retail space to the Bank of America building has been removed.