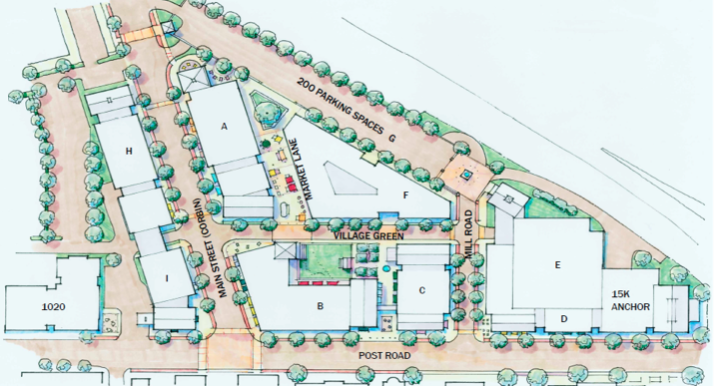 A map of the new proposal. Above-ground parking is along the highway (at the top); pedestrian space snakes from top to bottom in the middle; the street plan seems to be the same.

On Tuesday night, David Genovese offered the Planning and Zoning Commission more details than he previously made public about why his plans for the Corbin/Post Road downtown redevelopment project have changed.

The public meeting before the full board follows by about a month the developer’s meeting with two members of the commission and officials in the Planning and Zoning Department.

In his presentation, he offered some tentative numbers showing how much the square footage of retail, office and residential uses would shrink in the new proposal as compared with the old one, which had been approved (after being amended) by the commission a bit less than a year ago.

One of the chief reasons for the change, he said, was the discovery that the site was more difficult and expensive to excavate than had been expected. Test borings found it was rockier than had been known, and it was wet down there.

The plan, as approved by the Planning and Zoning Commission almost a year ago, included an expensive two-floor underground garage, at a cost of roughly $50,000 to $55,000 per parking space, with about 700 parking spaces underneath almost the entire site. With the new information Genovese had, and after discussing the project with the few companies in the state that were capable of doing the job, he found the cost estimates rise to as much as $75,000 to $80,000 per parking space.

Paying for the garage, as well as the rest of the project, would be rent from the various kinds of tenants — residents, retail businesses and businesses renting office space. Genovese didn’t believe he had enough rental space to generate the kind of revenues needed.

The Risks of Technological Disruption

Genovese also has another concern which he touched on briefly during the presentation and discussed more in an interview: Technical change related to self-driving automobiles, Uber and Uber-type driving services and even self-driving vehicles, electric cars and the declining price of solar power that could be used to power them could result in drastic changes in the way America and the world uses motor vehicles in the future.

According to futurist Tony Seba, for instance, a disruptive technological revolution may be about to start with some or all of those technologies combined, making it much less expensive to own a vehicle, and even less expensive to hire vehicles from a driving service. New York Times columnist Thomas Friedman has made some similar points, including during his recent talk in Darien.

So Genovese’s garage plans were reduced to a smaller space, with some of it above ground. The above-ground garage buildings would be built in a way that allowed for them to be refurbished in whole or in part to transform them into regular buildings if the technology scenario described by these authors proves to be the case.

By the Numbers: How Much the Project Shrunk 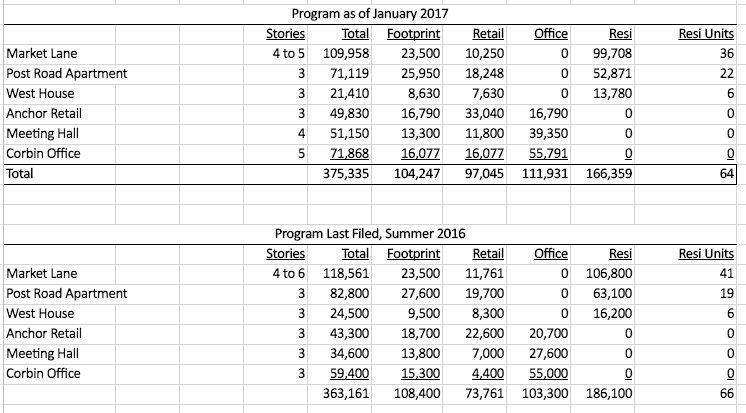 How the Corbin/Post Road proposal has changed over time, by the numbers

The new proposal would cut back that amount, although it also adds some of it back in an expanded proposal that would include land on the other side of Corbin Drive with three different owners.

The latest (tentative) proposal, much changed

A map of the new proposal. The letters identifying the buildings appear to be referenced in the table just above.