Darien High School students, can you come up with a different version of the “Drop It & Drive in Darien” logo that’s just started appearing on cars in town? You can enter your version in a new design contest for the logo.

First prize is $100, donated by Fresh Green Light (and the glory that goes along with being the winner, but you knew that). If you win, your design will be printed up as a car decal (printed by a donation from Stamford Signs) and be distributed to all DHS students (bet you didn’t know that part).

Got the chops for that? If not, second-place prize is $50 and there’s a third-place prize for $25 (both donated by Safe Rides).

The contest is co-sponsored by Darien Police and Drop It & Drive in Darien.

Decals, not magnets, will be printed with the new design, and they won’t replace the regular Drop It & Drive in Darien magnets. Those are still available in Town Hall (both at the table near the front door and in the First Selectman’s Office), although some places around town have run out.

A fresh stock of magnets have gone to Darien Library and Toy Box of Darien, and they’re also available (with a suggested minimum donation of $1 to help with production costs) at: Barrett Bookstore, The Depot, Heights Pizza, Town Hall, UPS store, the Healthy Child, Darien Toy Box, Darien Library and Wild Birds Unlimited.

Darien EMS-Post 53 vehicles, both ambulances and supervisor’s cars, now have the magnets, as do Darien patrol cars (and if you stop by Darien Police Headquarters, they may have some left).

Here’s a four-minute video from the Mythbusters TV show on whether or not its a myth that hands-free phone use by drivers is safer than driving with a phone in your hand:

Here’s the flyer for the contest: 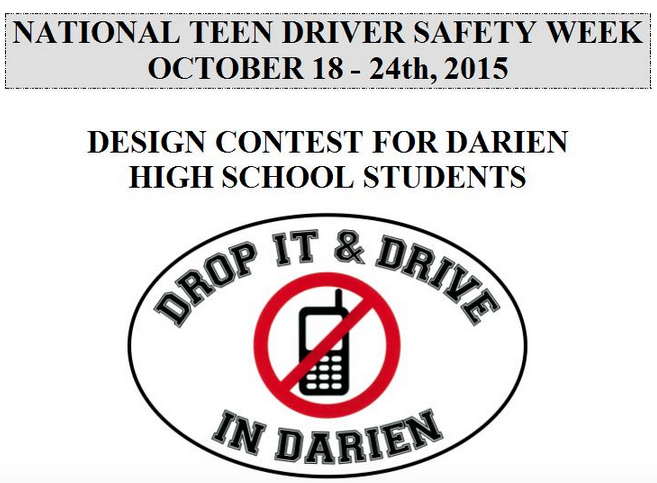 One thought on “Contest for High School Students: Design a Version of the ‘Drop It & Drive’ Logo”