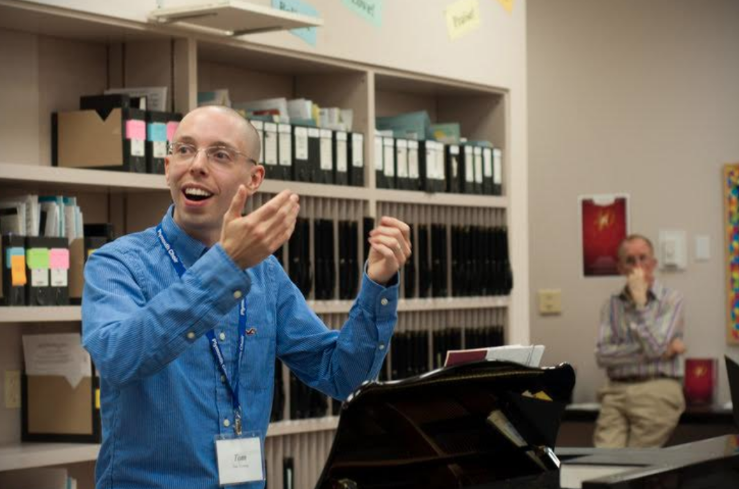 The First Congregational Church in Greenwich will be hosting the Connecticut Choral Festival concert at 7:30 p.m. Saturday, October 19 with a day-long rehearsal, meal, and evening concert.

— This article was originally published by GreenwichFreePress.com

The guest conductor will be Tom Trenney, minister of music at First-Plymouth Church in Lincoln, Nebraska. This festival is also sponsored by the United Church of Church Musicians Association and the Fairfield-West Chapter of the American Guild of Organists.

Tom Trenney shares his passion as pastoral musician, composer, and teacher in worship with his home congregation, First-Plymouth Church in Lincoln, Nebraska, in the college classroom, and in performances, hymn festivals, choral, and organ workshops and master classes all around the country.

Dr. Craig Scott Symons, Minister of Music at First Congregational Church of Greenwich says that, so far, there are singers attending the festival from West Hartford, Guilford, Stamford, and Greenwich.

“We’re very excited to be bringing Tom to Connecticut. He has been a friend for nearly 20 years, and we worked together in our respective congregations in Detroit in the early 2000’s.

“From 2009-2018, I had the honor of singing with his professional choir, sounding light, based in Detroit, which gave me a different perspective from the singing side of the podium rather than the conducting side. For one short rehearsal in 2011, Tom worked with the Chancel Choir at First Church, and they continue to reminisce on what an inspiring experience that was. Being able to spend four and a half hours with Tom will be a treat for everyone involved, singers and audience alike!” Symons said.

Mr. Trenney will also be conducting and playing the organ at First Church on Sunday morning, Oct 20, as part of the Dedication service at 10 a.m., following a five-month renovation project in their Meetinghouse (sanctuary).

New flooring, seating, lighting, electrical, plus expanded narthex with full accessibility to the outdoor Memory Garden area, were part of this project.

The Chancel Choir, along with guests from Saturday evening’s concert, will repeat some of Saturday’s repertoire in worship Sunday morning.

“Tom’s ‘other hat’ is that of award-winning organist. He will be playing some improvisations both Saturday and Sunday, as well as accompanying a few hymns for community singing,” Symons said.

The church is an open and affirming church affiliated with the United Church of Christ (UCC). It is fully accessible and parking is located behind the church, entering off of Forest Avenue.