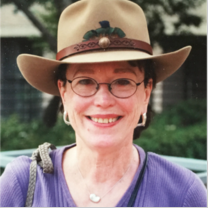 Clayton Raker Hasser slipped peacefully from this world on May 31, surrounded by family.

Born Jan. 28, 1941, the daughter of William and Betty Raker, Clayton grew up in Holden, MO and attended Christian College as well as the University of Missouri in Columbia where she received a bachelor’s degree in journalism. She raised her family in Darien, attending the First Congregational Church.

Clayton blazed a trail for women returning to the workforce in the 80s, beginning as a freelance writer and quickly rising to become editor of Patient Care magazine in Darien and later publisher and vice president of publications for the American Academy of Family Physicians in Kansas City.

An active member of Country Club Christian Church and its choir, Clayton traveled the world extensively with numerous vacations and mission trips to Africa, holding a special place in her heart for Kenya, where she spent eight months as a medical clinic director. She was an accomplished photographer, needle-pointer and an avid reader.

Memorial contributions can be made to Della Lamb in Care of the Country Club Christian Church, Kansas City, MO.

The family will receive guests from 6 to 8 p.m., Tuesday, June 5, at the church and parlor of Country Club Christian Church, 6101 Ward Pkwy, Kansas City, MO.

A Celebration of Life will be held at 10:30 a.m. ,Wednesday, June 6 at the church. The graveside service will follow immediately in her hometown of Holden, MO at 1 p.m. in the Holden Cemetery.

Editor’s note: The church appears to be named after the neighborhood, called the “Country Club District” in Kansas City, and at least one other church in the area also has “Country Club” in its name.