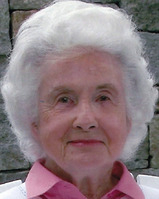 Born on Feb. 11, 1915 in Brooklyn, N.Y., to Harry Lawrence Tanner and Mary Louise Sears Tanner, she graduated from The Packer Collegiate Institute in Brooklyn in 1932. Charlotte graduated from Wells College, in Aurora, N.Y., in 1936.

Upon completing coursework at the Katherine Gibbs School, Charlotte served for several years as assistant to Alfred P. Sloan Jr., president and CEO of the General Motors Corporation, in their New York City office.

She was married for 53 years to William H. Timbers (who died in 1994), a federal judge appointed by President Eisenhower to the U.S. District Court of Connecticut, and subsequently by President Nixon to the U.S. Court of Appeals for the Second Circuit in New York.

For over 60 years, Charlotte lived in Darien, raising four children, and was active in the Noroton Presbyterian Church and with many parent-teacher organizations in the Darien school system.

— This obituary previously was published by Darien News.

She and her husband raised and showed their Norwegian Elkhound dogs in events throughout New England and New York. In 2004, she moved to the Essex Meadows retirement home.

Since 1975, Charlotte also maintained a home in Surry, Maine on Union Bay on the Maine coast, where she loved to garden and sail. In the early years, as novice sailors, she obtained a Certificate of Navigation from the U.S. Coast Guard, so she and her husband could determine a proper course, but more importantly, find their way home.

She was predeceased in death by her sister Elizabeth Tanner Arms. She is survived by her four children, John, Nancy, Dwight and William Jr. (Nick), ten grandchildren, and five great grandchildren.