Shake Shack’s “Darien Shack” opens at 11 a.m. Monday (with limited parking and an expectation that traffic will be high for a little while after it opens), but here’s a first look inside from an invitation-only event on Friday at the 1340 Post Road location: 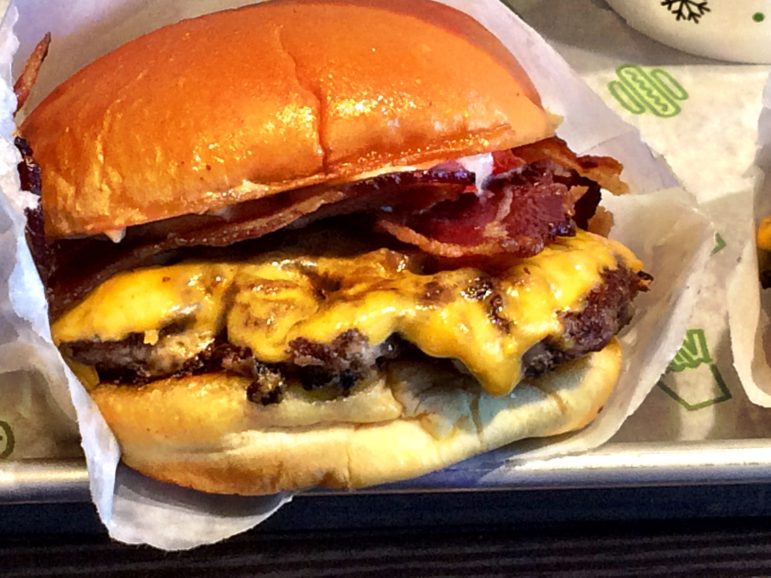 Up close and personal view of a Shake Shack burger: This one is the Single SmokeShack (also comes as a double). 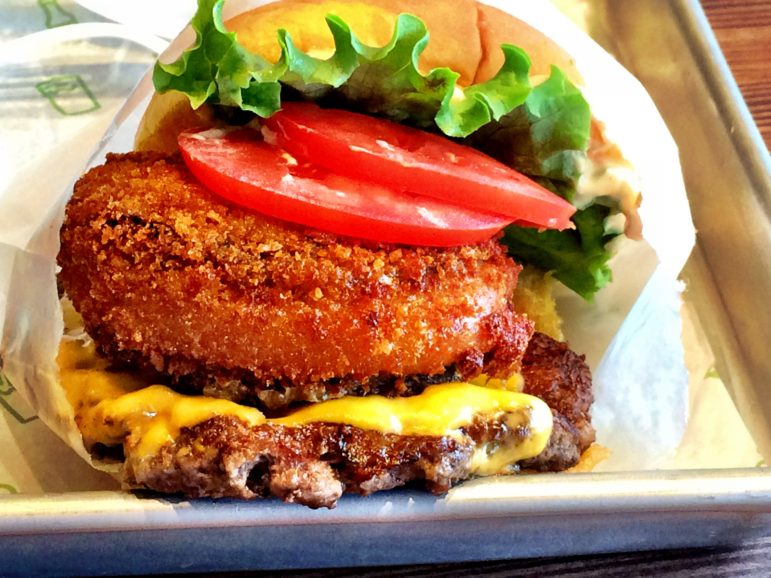 The buddy of the Shake Shack burger in the previous picture. Meet the Shack Stack, a combination cheeseburger and mushroom burger.

A look inside the indoor dining area, toward the ordering counter.

What Darien Shake Shack looked like last week. It won't be this empty after Monday morning.

The sign at the (sort of) northwest corner of the new building.

Meet Frank Velleca, general manager of the Darien Shack (on the left) and Dave Yearwood, Connecticut area director, who first got the construction hat when he opened the Westport shack as manager. They're standing in front of the menu on the wall near the entrance.

You order right near the main entrance, and you get a beeper, much like the ones Panera Bread gave out in Darien before they recently closed.

Andrea Keefe, manager of community partnerships at Hole in the Wall Gang, explained that nonprofit's recent partnership with Shake Shack in Connecticut (see our article, further down, for details).

You can eat outside, but who wants to in this colder weather?

Another view of the outdoor seating, some of which doesn't come with umbrellas. There's room for 94 customers in the store and roughly another 30 outdoors.

Another view of the dining area.

And another view indoors. Television screens are mounted high up in several places inside.

One of Shake Shack's signature signs went indoors for the Darien shack. 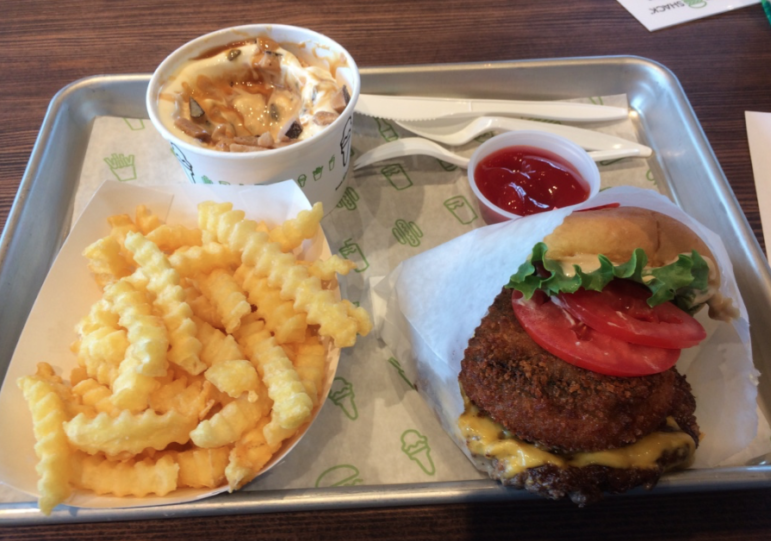 The price of what you see here (and that's without a beverage) is $17.63. All of it was very good, and at Friday's event it was all free.

Andrea Keefe, manager of  peer-to-peer programs at the Hole in the Wall Gang foundation started by Paul Newman was on hand promoting the nonprofit’s new partnership with Shake Shack in Connecticut.

For every “Pie Oh My” dessert sold at the Darien store, for instance, Hole in the Wall Gang gets a 5 percent contribution from Shake Shack, and the organization has similar arrangements with the other two Shake Shacks in Connecticut (in Westport and New Haven). The Hole in the Wall Gang Fund is “dedicated to providing ‘a different kind of healing’ to seriously ill children and their families, free of charge.”

Keefe said Hole in the Wall would like to get Shake Shack employees to visit their camps for possible projects and work with Shake Shack at some athletic events.