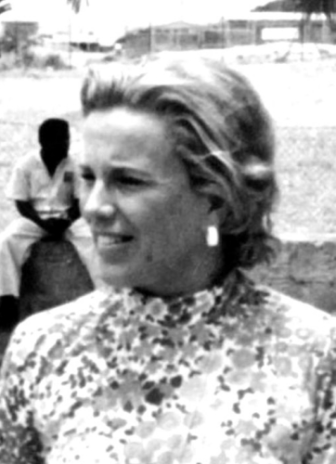 The cause of death was congestive heart failure.

Mrs. Harrington, known to all as Whit, was born March 10, 1930 in Binghamton, New York to William and Helene Whitney. She moved to New Jersey at a young age graduating from Columbia High School in Maplewood, New Jersey in 1948.

She holds degrees from Centenary College and Cornell University. She was a gifted athlete playing tennis and field hockey in college and continued to play tennis and platform tennis throughout her life.

While she and her husband travelled the world throughout their lives, her favorite place was home, and the center of her life was her family. She was happiest playing tennis or roller blading with her grandchildren and having her large boisterous family sitting around her dining room table.

— This obituary was published in the Manchester Journal

She lived for almost 40 years in Darien, where she led the Lassie League softball program for young female athletes and served in several leadership positions: the Literacy Volunteers, the Children’s Aid Society, and First Church of Christ Scientists, where she was the second reader.

Her true kindness and caring were cherished by all who knew her. She and her husband funded the education of many children of promise, all of whom became treasured members of their extended family.

In addition to her parents, Whit was predeceased by her sisters Jean Groo and Sally Rice. Her large and adoring family who will carry her love and joy through this world are: Roby, her devoted husband of 66 years; her loving children: Roby (Julie), Scott (Peejo), Todd (Ruth) and Susannah Wells (Peter); and grandchildren: Roby Andrew, Peter, Matthew, Thomas, William, Lindley, Whitney, Annika, Lily and Eliot.

Memorial Services will be held at 1 p.m., Friday, Oct. 25 at the Dorset, Vermont Congregational Church, followed by a reception at the Ekwanok Country Club in Manchester, Vermont.

Published in The Manchester Journal