Could it really cost $1 billion to replace the 562-foot Walk railroad bridge in South Norwalk? Or is there a cheaper alternative that CDOT is hiding from us.

We all know the woes of this 120-year-old swing bridge that sometimes refuses to close, stranding thousands of Metro-North and Amtrak riders. But the plan to replace it (using $161 million in Federal Sandy relief money) has ballooned from $600 million to $1 billion thanks to added rail yards and such.

Many in Norwalk are opposed because of the cost, others because they will lose their land by eminent domain. And everyone’s concerned about the years of construction and mess. The Norwalk Hour’s ace reporter, Robert Koch, even discovered that the Maritime Aquarium IMAX Theater may have to be demolished!

The CDOT has considered all sorts of new bridge designs … truss, lift, bascule, counter-weight and even an elevated fly-over. But I think I’ve found one design conspicuously missing that might be cheaper.

First, the good news. The CDOT is doing a great job of making this project open and inclusive. They have a website, they Tweet updates (@WalkBridgeCT), and host public meetings galore. They even have translated all their plans into Haitian Creole.

Unlike the horrendous Stamford rail station garage project, mired for three years in secrecy and rumors of political payoffs, the Walk Bridge project is certainly more transparent than the murky waters that flow under its tracks.

But that doesn’t mean people are having any luck slowing this juggernaut down. Until now. Because now we find that CDOT has been hiding a simpler solution.

WHY NOT A FIXED BRIDGE ?

Why not just “close the river” and replace the old bridge with a new, fixed bridge? That option is not even discussed in the voluminous Environmental Assessment Report. Why? I think I’ve found the answer … or at least an excuse. 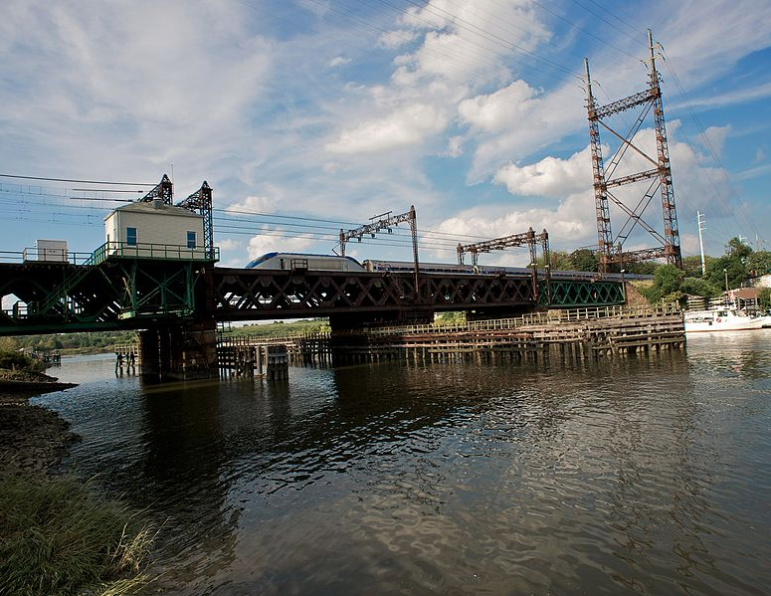 Blame the U.S. Coast Guard and Army Corps of Engineers. They want to keep the mighty Norwalk River, all two miles of it, open and navigable. But do they really have that much power? Isn’t it possible to force those Federal agencies to, in effect, close the river to boat and barge traffic by edict or a bill put through Congress?

Couldn’t the few companies still on the river — a concrete company, an idle asphalt plant and a small marina — be bought-out with money saved by building a cheaper fixed bridge that doesn’t raise or lower?

And most telling of all: Why isn’t this alternative even discussed in the crucial Environmental Impact Study (still open to public comment, now extended until November). Why?

A CHAT WITH THE COMMISSIONER

At Metro-North fare increase hearings  over a month ago I cornered CDOT Commissioner Jim Redeker and asked him. (Spoiler alert: critics of the bridge plan won’t like his answers.)

The Commissioner says that CDOT did ask the USG and ACE about a fixed bridge that would close the river and were told “no way” — though critics say such concessions have precedents.

More telling, Commissioner Redeker says whether fixed bridge or movable, construction will still disrupt the neighbors just as much and for just as long. And, says the commissioner, the cost savings for going to a smaller, simpler fixed bridge would only be 10 to 12 percent. Really? Hard to believe.

But I know Commissioner Redeker and trust his word, though many Norwalkers and environmental activists do not. There is only one way to resolve this debate, get the bridge fixed and keep the trains rolling and that’s face-to-face talks.

Till then, it’s all just rumor, speculation and misinformation feeding on itself. And the old bridge just keeps getting older.

Jim Cameron has been a Darien resident for 25 years. He is the founder of the Commuter Action Group and also serves on the Darien RTM. The opinions expressed in this column are only his own. You can reach him at CommuterActionGroup@gmail.com

4 thoughts on “Cameron on Transportation: The Billion Dollar Bridge”