A “C” rating, the worst in the town’s A-B-C ratings system, went to one town restaurant in the six food health inspection reports released Thursday by Darien Health Department.

The most recent batch of reports are from inspections that took place from  Feb. 6 to 11. Three establishments received a rating of “B,” and another two were rated “A.”

Keep in mind that a food-serving establishment with a history of good ratings may occasionally get a poor inspection rating, occasionally the best do, and every restaurant normally gets a few things wrong. Here’s an alphabetical list of the most recently released health inspection results (an explanation of how this list is put together is immediately below it):

—Steam — 971 Post Road — Feb. 8 — Town Rating: C — State Score: 77 — Inspector’s Remarks: “Three large sheet pan trays of dumplings cooling at 56 degrees, bowl of green beans at 71 degrees (on counter) and wontons inside a bag at 66 degrees (inside the bain marie on the cook line); no working food thermometer on the line (two not working); two employees handling raw chicken in back preparation area … moving to other tasks without hand washing; during [doing?] prep work on top of trash cans X2 …. boxes and oil jug on top of food preparation counters; sanitizer buckets are not in use (no bucket available in back prep room with large amounts of raw chicken being handled); just dipping in third bay [sink?] … adequate contact time needed!?!; a large stack of sheet pans left unclean, bowls unclean over three-bay sink, raw chicken juice dripping down a rolling cart onto other stored trays; plastic tubs without labels on the cook line; thawing two large pieces of raw beef on the counter; surfaces around the fryer and grill unclean, shelving of rolling cart on the line unclean; accumulation of trash and boxes inside and outside back door; unclean floors throughout and inside freezer walk-in; water coming in from the ceiling near the line/hood system (must be addressed today).” — Inspector’s Comments: “Do not stack wet bowls on the shelf above the three-bay sink, who has been trained? Ongoing training with Franklin Chu …. when is the next training scheduled? Clean the vent in the public restroom.” 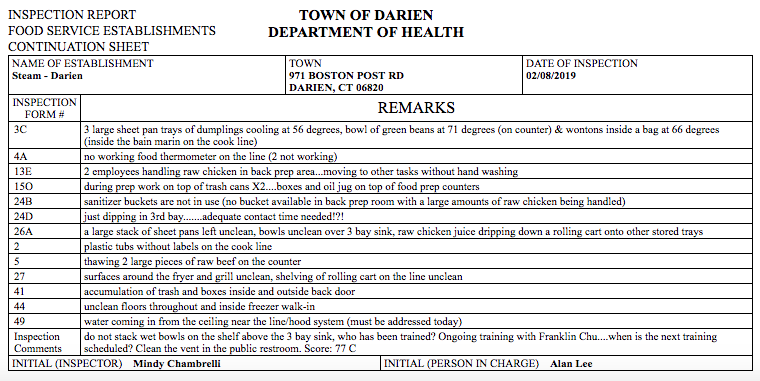 Inspector’s remarks and comments section of the Feb. 8, 2019 report for Steam restaurant.