Darien’s 484 or so public school teachers would get an average pay increase of almost 12 percent over the course the next three fiscal years under a contract recently approved with no public discussion by the Board of Education.

The teachers have already ratified the contract, which is officially estimated to cost the town $4.7 million more in its final, third year than the town now spends on its current contract, although the official estimate is artificially high.

A significant feature of the new contract is a concession by the union to have teachers at the secondary level (the middle school and high school) take on a larger number of classes: They currently teach 4.5 classes at a time. That would go up to 5 classes starting in the 2020-2021 school year, an 11 percent increase in work load. 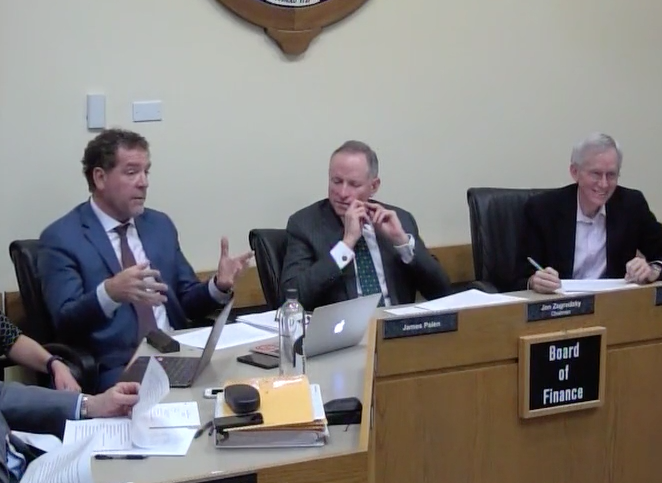 From the Darien TV79 video of the meeting

Board of Finance member James Palen explaining the proposed teachers contract to the rest of the board on Nov. 19. To the right of Palen are board Chairman Jon Zagrodzky and Vice Chairman Frank Huck.

The result of the extra workload could mean a gradual reduction in staff or smaller class sizes or a combination of both, unless the student population increases. Since some teachers already teach five classes and are paid extra money to do so, the district won’t have to pay that out about $200,000 a year, according to Board of Finance member James Palen.

Palen said that estimate is very rough: “The actual savings could be less, or they could be more.”

The town would save that much starting the first year, he said, and it amounts to a cut of 0.2 to 0.3 in the percentage increase of the cost of the contract, he said.

According to a memo from district Finance Director Richard Rudl and Human Resources Director Marge Cion, the cost of the contract and the percentage increase in wage costs to the town are officially estimated at:

The total increase in cost to the town would be $4,719,265 over this year’s budget by the third year of the contract, according to the memo.

Some of the Complexities

The percentages noted in the memo are all percentages of the current year’s expected spending on teachers’ wages. To get the total, actual estimate of wage increases year-to-year, the percentages need to compound, Palen said in a presentation to other members of the Board of Finance last week. Palen was a member of the district’s negotiating committee. Compounded, the three years of the contract amount to 11.34% more than current spending.

(None of these percentages takes into account the $200,000 in savings from no longer paying extra money for teachers who now teach extra classes.)

Palen also said that the official cost estimates are higher than actual expectations: They are based on an artificial assumption — that the entire teaching staff won’t have any resignations or retirements from now until the end of the contract.

When a teacher with more experience leaves and is replaced by one with less experience, the new teacher isn’t paid as much. The cost estimates are a uniform, traditional way that school districts can compare their costs with other districts and past contracts, he said.

Salaries make up 85 percent of the contract costs. Health insurance takes up much of the rest, Palen said.

Darien teachers already pay 21 percent of their health insurance costs, the highest amount paid in the “District Regional Group A” — districts similar to Darien that the state and school officials compare the town to, he said. That high percentage is also more than other school districts near Darien, and that wouldn’t change with the new contract. 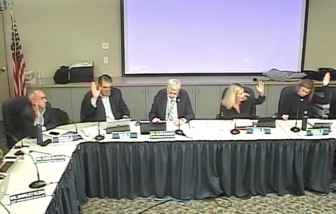 Board of Education members voting on the teacher’s contract on Nov. 12 (a video of the meeting is at the bottom of this article).

Palen’s description of the contract is the only extended description of it yet made in public. The school district memo, included in the documents made public with the Nov. 12 Board of Education meeting, was 1 1/2 pages long.

When the school district put together its negotiating committee, it included Superintendent Alan Addley, not long after he was hired by the district, along with Cion and Rudl (the authors of the later memo mentioned above), Palen as a member of the Board of Finance, and four members of the Board of Education. Those eight members faced 10 members of the Darien Education Association, the union representing teachers, and both sides had legal counsel.

The negotiations went on for about three months, Palen said. Teachers ratified the contract, and the Board of Education then approved it unanimously on Nov. 12.

How Teachers Can Increase Their Salaries

“The minimum [starting wage] in Darien is $54,125” a year, for a full-time teacher, Palen said. Teachers can expect to double that salary before they retire, he said.

The individual pay of a Darien teacher depends on a number of factors, including years of experience and level of education. They can get relatively small amounts of money in stipends for helping students with extracurricular activities like clubs or sports.

Each year a teacher is employed in the school district, the teacher gets a “step” increase in wages of 0.5%. Teachers generally start at Step 3 and continue to Step 19, when the steps end. Wage increases coming from new contracts further increase the wages paid in each step, making the salary increases greater.

“Generally speaking, all of these steps are between 4 and 5 percent,” when all is said and done, Palen said.

Comparison With Other School Districts

“We have teachers that are paid fairly equivalent — if you look at years of experience — compared with other towns,” Palen said.

Darien’s costs for teacher’s wags are somewhat lower because it has a smaller proportion of teachers at or above the top step, he said.

Palen referred to a document put together by the school district’s contract negotiation lawyers that, he said, shows Darien’s wages at the highest step are a bit above what Ridgefield and Wilton are paying “and consistent with others in our area,” he said. 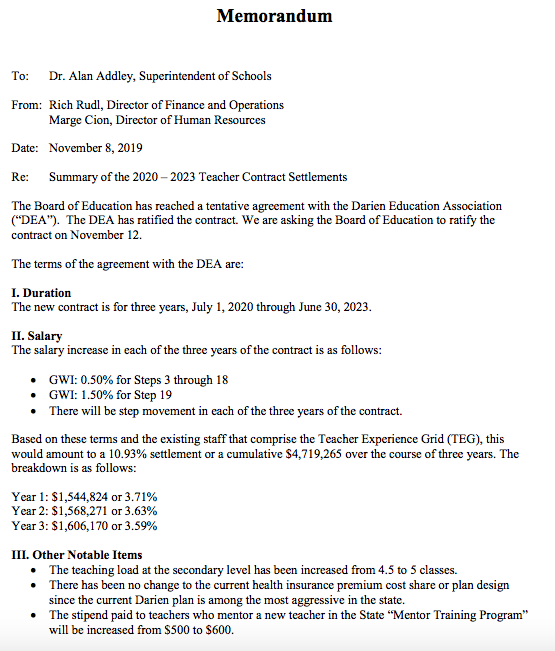 This 1 1/2 page memorandum describing the contract was published on the school district website among the meeting materials for the Nov. 12 Board of Education meeting, when the board approved the contract. “GWI” in the first two bullet items of Section II of the memo stands for “Gross Wage Increase.” 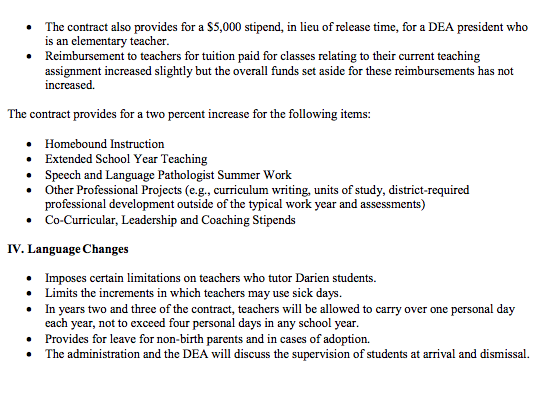 The second page of the memo.

Where the Contract Fits in Darien’s Upcoming Budgets and Taxes

Board of Finance Chairman Jon Zagrodzky said last week that with assessed values of high-end homes going down, taxpayers in many less expensive homes in town could face higher taxes even if town spending stayed the same.

Labor contracts with the Darien Education Association, the biggest union in town government or in the town itself, are the biggest single spending item in the town budget (making up about a third of it each year, very roughly $50 million).

Roughly another third of town spending consists of the rest of the school district budget, and the last third includes all other town spending, which is overseen by the Board of Selectmen and Board of Finance.

But teachers union contracts only get voted on twice in public: once by the Board of Education, which unanimously approved it at its Nov. 12 meeting, and then by the Darien Representative Town Meeting. Other town spending also goes to the Board of Finance, and the non-education part of the budget goes through the Board of Selectmen as well.

Your Tax Dollars in the Dark:

In Darien, the Biggest Spending Item Traditionally Gets the Least Public Discussion

Here’s the Nov. 12 Board of Education meeting in which the board spent less than 45 seconds (from about 1:43:32 to about 1:44:15) voting to approve the budget. Toward both the beginning and the end of the meeting, there was some public comment from people in the audience who spoke favorably about the contract: