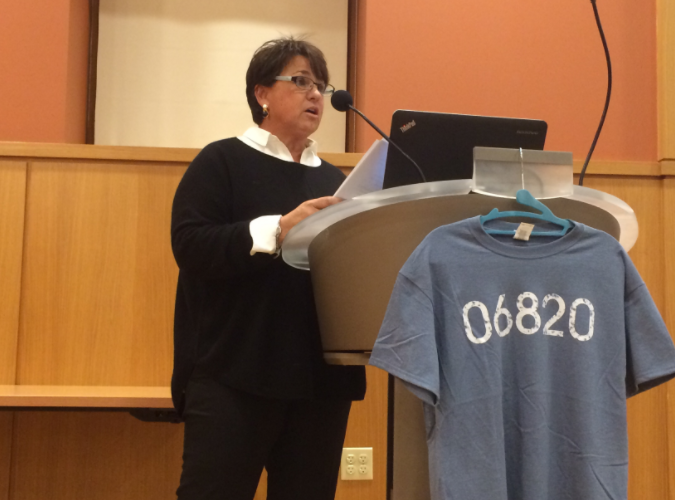 Suzanne Denunzio of Darien speaks Monday night at Darien Library before the showing of the documentary "Haze" about binge drinking.

Before the documentary “Haze” was shown to about 150 people, mostly high school students, at a meeting Monday night sponsored by a coalition of groups in town concerned about under-age binge drinking, Suzanne Denunzio, a Darien parent, got up to speak. 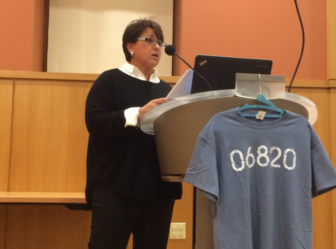 Suzanne Denunzio of Darien speaks Monday night at Darien Library before the showing of the documentary “Haze” about binge drinking.

The documentary is about how a University of Colorado freshman from Greenwich died from alcohol poisoning in his first month at school. He was binge drinking as part of a pledging ordeal to get into a campus fraternity. Denunzio is a friend of the family of the dead student.

We thought what she had to say was worth publishing in full and especially worth the time of any parent with teenage children, so we asked her to give us her prepared statement. Here it is:

Tonight, what you are going to see is a parent’s attempt to make some sense of a senseless tragedy. Haze is a documentary about Gordie Bailey’s experience his first few weeks as a freshman at the University of Colorado-Boulder.

— Editor’s note: Darienite.com will publish at least one more article about this event later today.

He was a tragic victim of an alcohol-related hazing ritual. So often we hear stories like this in the news, and we think it’s awful — and yet it seems distant from our reality. Parents and kids alike think, “Certainly, this would never happen to me.”

Well, I am here to tell you first-hand that Gordie and his parents never thought it would happen to them, either. Gordie wasn’t a delinquent, he wasn’t a hard partier. He was just like a lot of overachieving kids in our town. In fact, he grew up just down the road in Greenwich.

He attended Deerfield Academy, a prep school, where he was captain of the football team, defender on the championship lacrosse team, an amazing acapella singer, an actor and even the highly coveted selected position, proctor, in a dorm of underclassmen where he was a much beloved role model and leader.

Gordie was just a great kid, a lovable teddy bear; always ready to light up a room with his devilish smile — just like his dad. My husband crewed for his dad at Riverside Yacht Club. My father-in-law was Gordie’s godfather.

Gordie went off to college in Boulder in the fall of 2004 with the promise of a great future. The afternoon before this tragedy, just three weeks into school, Gordie had a few minutes after his club lacrosse practice. He called his mom to check in. He was so excited and happy. He told his mom he couldn’t really talk long because, happily, he had just gotten a bid to the fraternity Chi Psi and he had to run off to his “bid night.” Leslie hung up thinking how happy he was.

That was the last time Leslie would speak to him.

Little did Leslie know that Gordie was about to be taken blindfolded to the Arapaho Roosevelt National Forest where he and other pledges would be told to consume several handles of bourbon whiskey along with many bottles of wine in just 30 minutes. No one could leave till all was gone.

When the group returned to the frat house, Gordie, visibly intoxicated, was placed on a couch to “sleep it off” and left unattended. He was found dead a few hours later.

This kind of scenario may sound familiar to you. In the news recently, Tim Piazza, a 19-year-old Penn State freshman, fell down a set of fraternity basement stairs and died while undergoing a bid acceptance ritual.

A couple of weeks before that, Erica Buschick, an 18-year-old freshman at Miami University of Ohio, died. She had consumed multiple bottles of champagne and a water bottle filled with vodka while “pre-gaming” with her roommate in her room. She then went on to do vodka shots at a house party, then tried to go to a local bar.

When she was denied entrance because she was so inebriated, she was placed in a cab to be taken back to her dorm. The cab driver had to assist her to her room and placed her on a bean bag chair, where her roommate found her the next morning, dead of asphyxiation brought on by alcohol poisoning.

There have been two Connecticut college freshman deaths in the news in the last week. On Feb. 26, six UConn kappa Sig members were charged in connection with a UConn student’s October death. The inebriated UConn freshman was propped up against a garage door at the UConn public safety complex.

Just last Friday, March 3, a Central Connecticut State freshman fell to her death from the roof of a building that housed a bar frequented by college students and previously investigated for under-age drinking violations. Alcohol is suspected to be involved.

University of Colorado, Penn State, Miami University, UConn, Central Connecticut — and the list goes on. It is happening all around us.

I remember when I got the call about Gordie in 2004. I had four kids under 11, and it shook me. However, if I am honest, Gordie’s death really hits me more now — each time I send one of my kids off to college. When you talk to your college age kids you learn that scenes like you will see in this movie — the parties, the pre-gaming, the passed-out students, the alcohol induced, unwanted sexual advances, the ambulance runs — they are all real and they are all commonplace. Almost too commonplace as our children are often desensitized to the seriousness of each incident.

As parents, we cannot be blind to what goes on. we must educate our kids to understand the risks of alcohol: to know the signs of alcohol poisoning and to be a good friend to someone in need — don’t ever leave your buddy; prop them on their side; put a backpack on their back so they can’t roll over; and, above all, call 911 if you see the signs of alcohol poisoning. There are immunity laws to protect those under-age that bring the student in.

Gordie didn’t have to die. He could have just had a stupid story to tell the next day, but instead it turned tragic.

In closing, I apologize in advance — for I may walk out in the middle of this showing, as this isn’t an easy film to watch, particularly when you know the victim — but much like the awful car crashes seen in the driver’s ed video, or the woman witgh the raspy voice hooked up to her oxygen tank in the no-smoking commercial, or even the young girl texting while driving all her friends just before she crashes the car in the no-texting commercial — this video is NOT designed to be easy to watch. Like those videos, this is meant to provoke thoughts and start discussions.

Gordie’s parents produced this documentary so that others might not have to endure what they have.

2 thoughts on “Binge Drinking Hits Close to Home: Some Things Darien Parents and Teens Should Know”