The Maritime Aquarium at Norwalk will begin construction of a 4D movie theater and replacement exhibits sometime later this year and in 2019, part of the aquarium’s advance response to the rebuilding of an adjacent railroad bridge.

As part of the changes, the IMAX theater (Connecticut’s largest) will close for good sometime in 2019, seals will get a much larger tank, some exhibits will be moved permanently and others closed temporarily.

— an announcement from the Maritime Aquarium, edited by Darienite.com. As frequently happens with major construction projects with a lot of different steps depending on other steps, timing of various elements of the changes is pretty fluid. The schedule has changed in the last two months and may well change again. You can call the aquarium at (203) 852-0700 if you were hoping to see a particular exhibit mentioned here and want to confirm whether it will be open when you plan to come.

The Aquarium’s main entrance is expected to close sometime early in 2019 to allow for construction of a 179-seat 4D theater on the site of an adjacent employee parking lot. 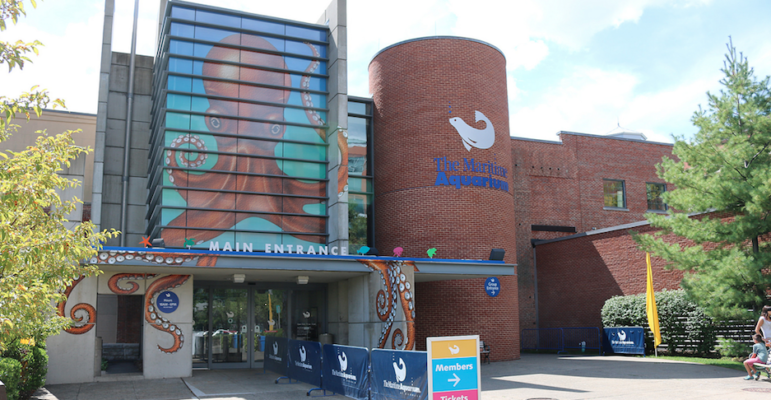 Within months, the main entrance at the north end of the Maritime Aquarium is expected to permanently close as part of a large construction project. Buses will still stop here, but the new entrance will be around the corner (to the right) and down the street.

Additionally, the “Go Fish” exhibit has closed to begin its repurposing into a temporary home for the Aquarium’s five harbor seals.

The seals will move there in early 2019, allowing construction to begin on a 150,000-gallon, two-story enclosed seal habitat on the site of the seals’ current display in Newman’s Own Hall. (At 30,000 gallons, the seals’ temporary home is actually larger than their current 22,000-gallon exhibit.) 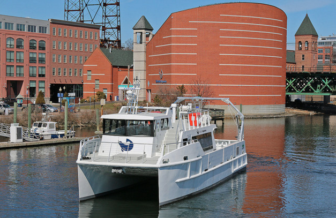 The brick building with the white horizontal lines in the background of this picture, housing the Maritime Aquarium’s IMAX theater, will be torn down sometime after June 2019 to allow for replacement of the Walk Bridge (you an see the green and dark girders of the current bridge just to the left of the IMAX building.

And the second-floor PlaySpace for toddlers is expected to close in December so construction can begin on a replacement “Meerkats” exhibit.

“These are significant projects, but they have been designed and timed to have the least impact on our animals and on our guests,” said Dave Truedson, the Aquarium’s chief operating officer. “It’s critical that we do them now, simultaneously, so that we can be prepared for the Walk Bridge effects.”

During construction, the minimal impacts on visitors are:
– seal-training demonstrations, usually offered three times a day, will not be presented.
– temporary losses of the “Go Fish” exhibit and the PlaySpace.
– and a shift of the Aquarium’s front doors. Visitors will enter the Aquarium down steps at North Water and Marshall streets (the site of its original main entrance from 1988-2001). There is a ramp at this original entrance to help people with disabilities enter and leave the building, and it may be adjusted further when the entrance is reopened next year.

(Buses will still unload at the current bus circle, but passengers will walk down North Water Street to the temporary entrance.)

The projects are occurring so The Maritime Aquarium can brace for replacement of a railroad bridge that runs between the Aquarium’s main building and its IMAX Theater.

Called the Walk Bridge, the swivel bridge was built in the 1880s. In recent years, it has been getting stuck in the open position, thereby shutting down MetroNorth’s New Haven Line and Amtrak’s Northeast Corridor route.

The multi-year replacement of the bridge, expected to begin in 2019, requires removal of the Aquarium’s iconic IMAX Theater and a riverfront structure that is home to the “Go Fish,” “Meerkats” and “Dragons” exhibits.

Aquarium officials recently negotiated with state and federal officials for a “functional replacement” agreement to build a new theater and to relocate and fortify elements of the Aquarium to be lost and impacted during the bridge work.

The estimated $34.5 million agreement involves federal and state dollars. No money will come from the City of Norwalk.

“We thank the City of Norwalk and the Connecticut Department of Transportation for being responsive to the impact that the bridge project will have on the Aquarium,” Truedson said.

“Minimizing the significant economic damages that will occur due to the project is critical if the Aquarium is to remain one of the state’s largest tourist attractions and an economic driver for the city and state.”

“How to maintain our quality guest experience is part of every brick-and-mortar discussion,” Truedson said. “We ask for patience and understanding through the construction periods. But guests also will see some fun creative offerings, as work progresses, that actually take advantage of the situation.”

With a planned opening in October 2019, the 4D Theater will be built in conjunction with SimEx-Iwerks Entertainment, which will provide 3D digital projection, proprietary 4D sensory seats and other in-theater 4D special effects, and a selection of educational and seasonal film titles.

The new theater will be multipurpose, capable of 2D and 3D digital screenings and have a stage for lectures and other guest presentations.

(As planned, movies will continue to play daily on the Aquarium’s six-story IMAX Theater screen through sometime next year. The original expectation of closing the IMAX in June 2019 is now expected to be delayed until sometime later that year.)

Estimated to open in January 2020 (it may happen later), the new seal exhibit will reach up to the current exhibit’s balcony level and be fully enclosed by a new exterior wall. The deeper, larger exhibit will protect the seals from the noise and vibration of the Walk Bridge work.

Its design is based on behavioral animal studies and on recommendations from other member institutions of the Association of Zoos & Aquariums.

At 150,000 gallons, the seals’ new home will be the Aquarium’s largest; 40,000 gallons larger than the signature shark-filled “Ocean Beyond the Sound” exhibit.

“Meerkats” will open in its new second-floor location, next to a new PlaySpace. That was previously expected to happen in April 2019.

Even more work in response to the Walk Bridge project is required by the Aquarium. As planned, construction of a new permanent main entrance and a relocated “Go Fish” exhibit will begin in June 2019 at the site of the temporary main entrance. That work is expected to take a year.

About the Maritime Aquarium

The Maritime Aquarium at Norwalk is a not-for-profit organization whose mission is to educate visitors about — and to create stewards for — Long Island Sound. It accomplishes this by allowing visitors to get close to some 300 species native to the Sound and its watershed, including sharks, seals, sea turtles, river otters, jellyfish and other animals.

One of the top places for family fun in Connecticut, the Aquarium also features standards-based educational programs, public study cruises out onto the Sound, and Connecticut’s largest IMAX movie theater, with a screen that’s six stories high.  TripAdvisor.com reviewers rate The Maritime Aquarium as one of the Top 20 aquariums in the U.S. and No. 1 in New England.