Baywater Corbin Partners has reapplied for zoning approval to redevelop the Corbin Drive/Post Road/I-95 tract of land downtown, this time lowering the proposed height of its tallest building to 69 feet, with five stories.

The 69-foot height, according to the announcement, is within what P&Z Commission members have indicated they are comfortable with:

[T]he tallest portion of the largest building proposed is reduced from our initial request of to 93 feet, measured from the first floor of the building, to 69 feet (a reduction of 26 percent). During their deliberations, the P&Z Commission members appeared to be comfortable with a maximum building height ranging from 65 feet to 75 feet.

In early September, after the last P&Z Commission discussion of the proposal, Darienite reported that the commissioners said 55 feet was as high as they wanted to go (measured by the midpoint of the roof, as Darien town officials customarily do). But a few commissioners indicated they weren’t uncomfortable with buildings somewhat higher than that.

Baywater Corbin said in the announcement that its hoping for a Nov. 9 initial public hearing on its new proposal. A proposal for a zoning change for large developments typically precedes more detailed site plans, which are proposed separately.

Baywater Corbin Partners, LLC announced today that it has filed with the Town of Darien a revised application for a text amendment which would enable a redevelopment of a significant portion of downtown Darien located between Whole Foods Market and Corbin Drive, along the Boston Post Road.

Baywater has been working for over 11 years on this project, and in the last 18 months engaged the firms of Robert A. M. Stern Architects, Gibbs Planning Group and Tighe & Bond to assist in the development of its plans. Legal advisors to Baywater are Maslan Associates and Shipman & Goodwin.

Problems Encountered in the Original Approach

“It became clear to us during the deliberations of our request by Darien’s Planning & Zoning Commission that the Commission was lacking critical information needed to consider our application properly.

“The Planning & Zoning Commission also expressed during its deliberations some significant concerns regarding the height of some of the buildings proposed.

“Given the requirements of the public hearings process, and the fact that the public hearings had closed for our initial request, the only way for us to properly deliver this information to the commission was to withdraw our original application and re-file the request.

“We have made significant modifications to the proposed text amendment in response to feedback received from and concerns expressed by Darien’s Planning & Zoning Commission.

“We also realized in recent weeks that in our effort to simplify our presentation of what is arguably the most complicated project to ever be presented to the Town of Darien, we did not sufficiently inform the commission of how each of the buildings we would like to build varies in terms of architecture and scale, as well as the key drivers of certain of our requests, such as interior ceiling heights required by the market today.

“Our revised application provides details for each of the contemplated buildings. 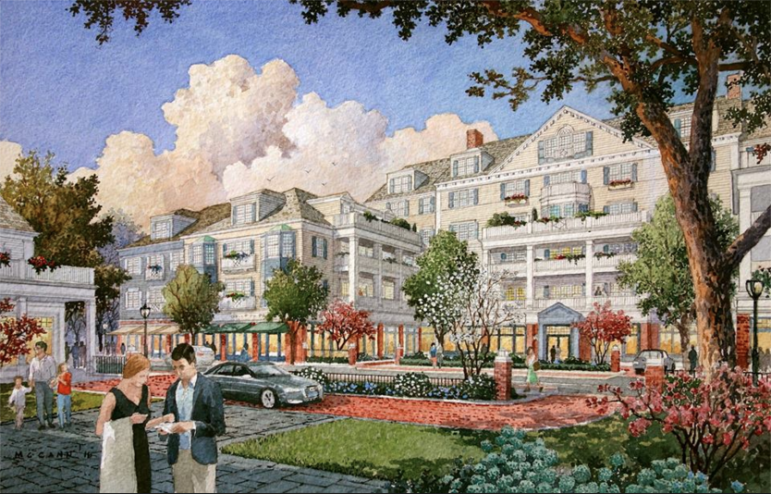 From the previous proposal, this building would have been the tallest on the site. It has one less story and a height of 69 feet in the revised proposal.

“Most significantly, we have reduced the requested height of the tallest portion of the largest apartment building proposed for the project. This building, as originally designed, had two wings of four stories each, with a center core of six stories.

“We have modified this building’s design to be of four, five, and four stories. We have adjusted the interior ceiling heights in several of the retail spaces, and we have effectively committed to a specific approach to construction which will enable us to reduce the space required between floors.

“During this early phase of a project we would not normally make these decisions until further design work was completed.

“The sum of all of these changes means that the tallest portion of the largest building proposed is reduced from our initial request of to 93 feet, measured from the first floor of the building, to 69 feet (a reduction of 26 percent). During their deliberations, the P&Z Commission members appeared to be comfortable with a maximum building height ranging from 65 feet to 75 feet.

“The community support that we have received for our idea has been unprecedented, particularly for a project of this magnitude. It seems clear to us that the people of Darien are very supportive of the concept that we presented, but the devil is in the details.”

Based upon the new filing, it is expected that the first public hearing of Baywater’s revised request will occur in November 2016. Additional information can be found on the website Baywater created for its project, www.yourdowntowndarien.com and on the Town of Darien’s website.