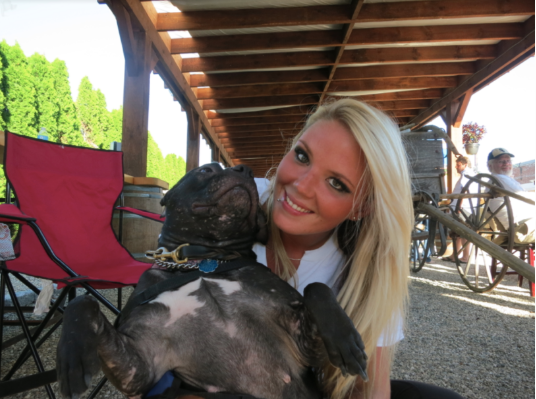 Heidi Leuders with a pit bull type dog at an adoption event in Norwalk in 2013.

Fairfield Police have obtained an arrest warrant for Heidi Lueders, 31, the president of a New Canaan dog rescue organization, two weeks after the remains of five dogs in cages were found in her Fairfield apartment, police announced Thursday afternoon.

Lueders, president of Bully Breed Rescue, which focuses on rescuing mostly pit bull dogs, is charged with five counts of animal cruelty and one count of first-degree criminal damage to landlord’s property. Her bond was set at $50,000 by a judge in state Superior Court in Bridgeport.

Heidi Lueders with a pit bull type dog at an adoption event in Norwalk in 2013.

“The Fairfield Police Detective Bureau is currently coordinating the terms of her surrender,” the town police department said in the announcement.

Police have said it appeared the animals were neglected inside of their crates. All that remained were their skeletons.

The remains of the dogs were discovered by the landlady who noticed a foul smell. 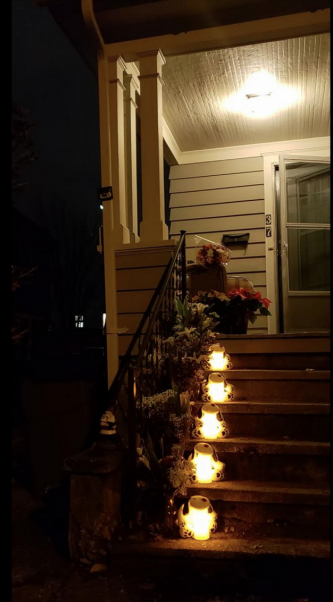 Someone placed flowers and five lanterns in honor of “The Fairfield Five” on the steps of 37 Prince Street in Fairfield where the remains of five dogs were found on November 15.

The organization’s website, which previously showcased dogs available for adoption and upcoming fundraisers, shows a message from the organization’s vice president, Chris Antolini, saying that Lueders, president of the organization, had assured the rescue group that the dogs were in good care — with five in sanctuary and one in a foster home she was monitoring.

He said others in the organization were surprised to find that the dogs were still with Lueders. (Darienite.com recently found some other pages on the website were still up on the Web, but with no links from the home page, largely removing them from sight.)

Lueders has been arrested in the past. The charges appear to have been dropped, as Lueders has no criminal record, according to Connecticut Judicial Branch records.

In August 2015 New Canaan police charged her with assault, disorderly conduct and second-degree reckless endangerment after she was accused of going to a home to help a friend collect a debt. In that incident, Lueders was accused of letting her 70-pound dog out of the car — it then reportedly bit the person she was trying to collect the debt from.

Also, in 2015 she was arrested after Stamford police accused her of going to the home of her boyfriend’s ex-wife and hitting the tires of a guest’s car with a hammer. According to Stamford police, the ex-wife got involved and a physical fight with Lueders took place.  The boyfriend and Lueders were each arrested. Her .380-caliber handgun and her pistol permit were seized by police.

A candlelight vigil and blessing is planned for Saturday, Dec. 1 in honor of the five dogs, “The Fairfield Five.”  The event takes place from 4 to 6 p.m. at 611 Old Post Road Town Hall Green in Fairfield.

“This tragic incident is, unfortunately, not a rare occurrence,” State Rep. Fred Camillo, a Republican known for his animal welfare advocacy, said in an email Thursday afternoon: “Even those who may have started out in animal welfare endeavors with good intentions should be prosecuted to the fullest extent of the law.

“It is yet another example of why Governor Malloy erred in vetoing the animal abuse registry bill last session,” he continued, adding that when someone harms an innocent animal, that person should forfeit the right to own an animal or be involved in any animal welfare organization.”

Camillo said he plans to reintroduce the bill again this session and will do so in honor of the “Fairfield Five.”

— Most of this article was published by GreenwichFreePress.com.