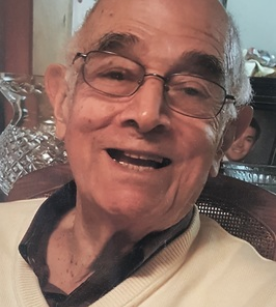 Anthony M. DeVito, Jr., 92, of Darien passed away on Wednesday, May 6, 2020 at Stamford Hospital due to complications from Covid-19.

He was born in Stamford on Oct. 27, 1927 to the late Anthony M. DeVito Sr. and Angelina Christiano DeVito.

He was a graduate of Stamford High School, Class of 1945 and Pace Institute, Class of 1949, where he received a degree in accounting. Anthony then started a successful accounting partnership with Canio LoRusso, called DeVito & LoRusso, that lasted for many years.

He was a veteran of the Korean War, having served in the Army from 1950 to 1952 in the 192nd Field Artillery Battalion in Germany, and was honorably discharged in 1952 as sergeant first class.

He was a longtime member and past president of the Italian Center and a parishioner of the Church of St. Cecilia where he was an usher. He was an avid golfer, and achieved a hole in one at the Doral Club in 1967.

Anthony enjoyed his Italian dinners prepared by his wife Rose on Sunday with his family and friends. He also loved transporting his grandchildren to all of their events, especially their trip to the toy stores. He will be remembered as a wonderful, generous and loving husband, father, grandfather and brother.

The DeVito family would like to send a heartfelt thank you to the Stamford Hospital caregivers, doctors, nurses and the social workers for their wonderful care.

Anthony is survived by his devoted wife of 67 years, Rose Vasone DeVito, his loving children, Anthony M. DeVito, III, Karen DeVito Corcoran and her husband John and Kim McLean and her husband Scott, as well as his brother, Robert DeVito and his wife Alvera.

Besides his parents, Anthony was preceded in death by his son, John (Jack) Anthony DeVito and by his in-laws, sisters-in-law and brothers-in-law, Albino and Ursala Vasone and Bruno and Celeste Vasone.

Due to the restrictions caused by the current public health situation, a private graveside service was held. A Memorial Mass is to be celebrated in Anthony’s honor at a later date.

In lieu of flowers, the family requests that donations be made in Anthony’s memory to Church of St. Cecilia, 1184 Newfield Avenue, Stamford, CT 06905 or to Stamford Hospital, One Hospital Plaza, P.O Box 9317, Stamford, CT 06904.

— an obituary from the Nicholas F. Cognetta Funeral Home & Crematory, where online condolences may be left