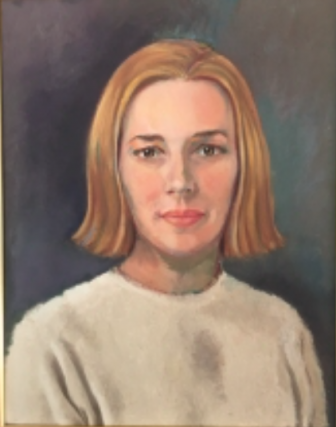 Born in 1924 in Detroit, her father, Hubert Hartman, was at one time head counsel for Ford Motor Company. Ann spent her childhood summers at Camp Ak-O-Mak, Ahmic Harbour, Ontario where she excelled at diving, sailing, and tennis.

She was president of her Delta Alpha Delta Sorority during her high school years, booking dances wth Tommy Dorsey, Glen Miller, Benny Goodman and Louis Armstrong. She was also president of her class at Bradford Junior College.

In 1945, she was accepted into the top professional ballet class at Ballet Arts at Carnegie Hall. However, Ann decided the life of a performing artist was not for her and returned to Detroit, where she modeled for the high fashion DeVois Clothing store.

She married Robert Burns Carter in 1948. They had one daughter Marnie (later Marnie Coates), then moved to Short Hills, New Jersey in 1952, where their son, John, first lived. They were members of Canoe Brook Country Club.

The Carters moved to Darien in 1960 and joined Wee Burn Country Club. Ann, of course, excelled there at tennis and paddle tennis. Bob was a publisher with Bill Communications in New York. Ann was active in Junior League holding many volunteer jobs, including one with Head Start, and at one point was president of the local Planned Parenthood chapter.

Ann’s connections and persuasive letter-writing helped lead the auto industry to make black matted dashboard tops standard. In 1959, we were the only family I knew of who had seat belts installed.

In 1974, Ann took on a part-time paying job as a home decorating consultant for Lord & Taylor and advised a few celebrities in the area.

In 1984, the Carters bought a condo in Hillsboro Beach, Florida, adjacent to both the beach and the Inter-Coastal Waterway. In her 60s she was winning tennis tournaments at the Boca Raton Club. However, Robert died in 1985, but Ann maintained both residences for her remaining years — living in her beautiful woodsy Darien house overlooking a brook and pond for 60 years.

Ann loved natural beauty, animals, travel, The New Yorker, books, tennis, and bridge. She profusely loved both the family she grew up with (her older brothers were Bob and John Hartman) and the family she made. Equally so, she loved to have a good laugh with her friends, but especially so with her daughter Marnie, who died from a brain tumor on Christmas morning of 2011.

She could be an extremely determined woman who thought creatively and persistently to have things the way she wanted. Milky Way did bring back their dark chocolate bar.

Ann is survived by her son, John; her grandchildren, David Coates, Margaux Carter Kravshik, and Daniel Carter; her son-in-law, Paul Coates; and grand-son-in-law, Michael Kravshik. And, perhaps, no mother and daughter-in-law got along so lovingly well as Ann and Annette Tummillo.

Memorial donations may be made to National Park Conservation Association, Humane Society, or Planned Parenthood.