Americares has committed $2.5 million in aid for the wildfires raging throughout the western United States.

Americares support will include critically needed medicine and relief supplies valued at $2 million plus at least $500,000 in financial support for families and health care centers in affected areas.

The record blazes have scorched millions of acres of land, blanketed the region with hazardous smoke, displaced tens of thousands of people and led to more than 30 deaths.

With over 100 wildfires burning throughout the West Coast, Portland, San Francisco and Seattle have all experienced “unhealthy” air quality during the last week, prompting one monitoring organization to declare those cities as having the worst air quality in the world.

In California, where smoke particles colored the skies red and orange, more than 3.3 million acres have burned, with six of the state’s 20 largest wildfires in history occurring this year alone. 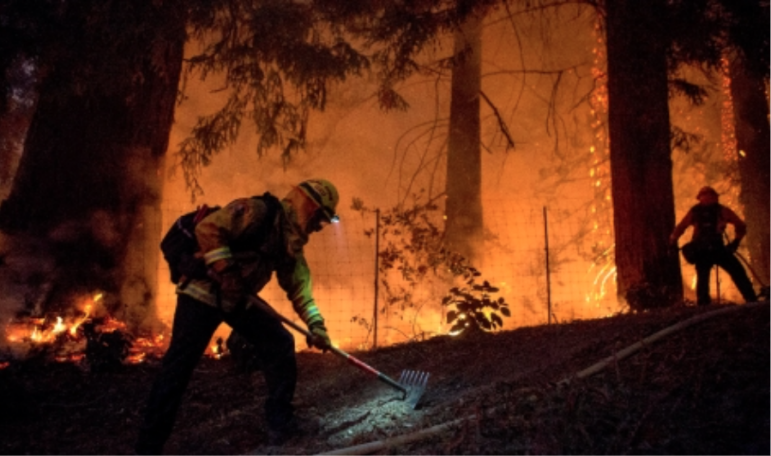 A CalFire crew from Santa Cruz work to prevent the CZU August Lightning Complex fire from reaching a home in Santa Cruz, California, on Aug. 21.

In Oregon, authorities estimate that roughly 500,000 people—over 10 percent of the state’s population—have been forced to flee their homes as a result of the fires.

“There’s an enormous need for medicine to support patients with asthma, COPD and other respiratory conditions. At the same time, there is an increased need for PPE to protect health workers and relief teams responding to the crisis,” said Americares Vice President of Emergency Programs Kate Dischino.

“Some health centers are caring for twice as many patients with evacuees from nearby towns fleeing from the unrelenting fires and smoke.”

How You Can Help:

Donations to Americares U.S. Disaster Relief Fund will support its response to the wildfires and other domestic emergencies. To donate, go to Americares.org/USDisasterFund

The Stamford-based organization has offered assistance to more than 80 clinic partners across California, Oregon and Washington.

Americares is also providing cash assistance to displaced families in Sonoma and Lake counties and providing 1.4 million bottles of water in California and Oregon through a longstanding relationship with Nestlé Waters North America.

Americares is committed to awarding at least $500,000 in financial assistance for families and safety net health centers in wildfire-affected communities.

Longer term, Americares plans to invest in the recovery and resilience of local health centers, strengthening and expanding services for patients relying on services provided by the safety net health system.

Donations to Americares U.S. Disaster Relief Fund will support its response to the wildfires and other domestic emergencies. To donate, go to americares.org/usdisasterfund

Americares, headquartered in the Glenbrook section of Stamford, is a health-focused relief and development organization with professional relief workers ready to respond to disasters at a moment’s notice.

The organization stocks emergency medicine and supplies in its warehouses in the U.S., Europe and India that can be delivered quickly in times of crisis.

Americares has a long history of responding to emergencies in the U.S., including Hurricanes Harvey, Irma, Maria and Michael; the Joplin tornado; the 2017 California Wildfires; the Carr Fire; and most recently, the COVID-19 pandemic.

Since its founding more than 40 years ago, Americares has provided more than $18 billion in aid to 164 countries, including the United States.