Darien Library presents a new four-week series on American slavery which started in 1619 in Jamestown and ended with the Civl War in 1865.

Mark Albertson’s first lecture of the American Gulag series is on Monday, January 7 from 3 to 4:30 p.m. in the Community Room. Lectures take place on Mondays through Jan. 28.

— an announcement from Darien Library, with additional information from the library website

American Gulag: 2019 marks the 400th anniversary of Dutch traders bringing the first 20 Africans to the New World, depositing them at Jamestown. 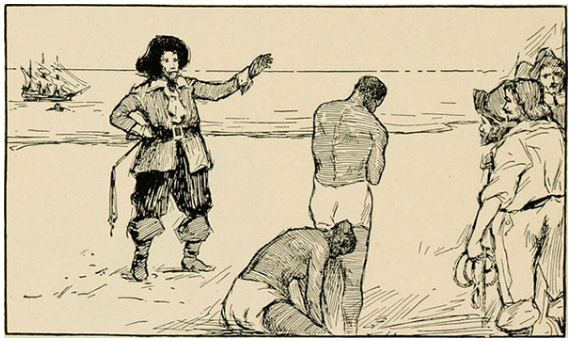 Image from “Hazen’s elementary history of the United States; A Story and a Lesson” (1903)

Thus the stage was set for that sordid trade in human trafficking that will spawn a racial divide that exists to the present day. Vassalhood consigned humans to the bondage of a never-ending purgatory in the American Slaveocracy.

Unpaid toilers who, over the next two-and-a-half centuries, slaved and sweated in the American Gulag as living and breathing property, owned, for the most part, by the Planter class.

This series will dissect that progression, starting in 1619, to the demise of the Slaveocracy below the Mason-Dixon Line in 1865. Concluding with an analysis of the aftermath of Slavery on the social fabric in the Republic.

Mark Albertson is the historical research editor at Army Aviation magazine and is a long-time member of the United States Naval Institute. In addition, Mark teaches history at Norwalk Community College.

His courses include: World War I and Iraq: Creation of Colonialism; A History, Vietnam; A History, World War I; The Turning Points of World War II; The Great Patriotic War: The Titanic Clash Between Nazi Germany and the Soviet Union; and American Empire: Grand Republic to Corporate State.