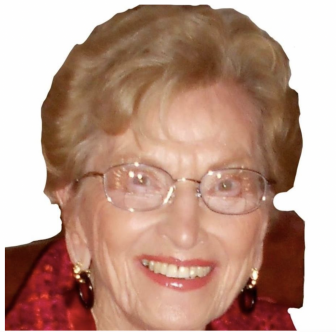 She squeezed every last drop of life from the mortal one granted to her by God. She was a resident at The Willows At Springhurst nursing home. Formerly a resident of Darien for almost 60 years, she was previously a 20-plus year resident of Bellevue, Pennsylvania.

She graduated from Bellevue High School, active in the school newspaper and basketball, softball, volleyball and soccer. Later she earned a secretarial degree from The Robert Morris School of Business, learning shorthand for dictation, which she used throughout her work life, and later at home to baffle her children with her grocery lists. Alice worked as a secretary for nine years at Pittsburgh Limestone, a subsidiary of U.S.Steel.

She met her future husband Jack in Pittsburgh and they married in 1950. Jack was the late John J. “Jack” Canavan of Darien, son of general contractor, Anthony J. “Tony” Canavan, a longtime town resident. The newly married couple moved to Darien, where they built their “forever home” and raised two children — a son, Christopher, and daughter, Macaire (Carrie).

Alice returned to a career, taking a job as a legal secretary for Cummings & Lockwood law firm in Darien. She thrived in this work atmosphere for 18 years until retirement, and made longterm friendships of her close coworkers.

She volunteered with the Darien Book Aid Plan, Meals on Wheels, and ran bingo events for an “old folk’’s home” in Norwalk. Jack and Alice were regular 6 a.m. poll volunteers on voting days. A 25-year member of the Darien Historical Society and Goodwives Quilters, she played a major role in the 1976 Darien Bicentennial Quilt of historic Revolutionary War homes in the area. Insatiably curious, Alice was also a member of the Lifetime Learners Institute of Norwalk.

In their later years, Alice and Jack traveled extensively, taking cruises and traveling the U.S. and abroad, especially to Ireland, where they visited Jack’s many relatives from Crossmolina, County Mayo.

Into her late 80s, Alice relished her daily 2-to-3 mile walks to nearby Gorham’s Pond or Pear Tree Point Beach. In 1990, after Jack passed from a sudden heart attack, Alice stayed in their beloved Darien home and spent treasured time with her son’s family. She joined them for many cookouts and holidays and relished time with her two grandchildren, taking them to the beach, museums, ice skating on the pond and baking together.

In 2009, Alice relocated to Louisville to live near her daughter’s family. There, she found an assisted living community she adored — Magnolia Springs. She signed up for more activities and outings than any resident, offered to rake their fall leaves and shovel snow off their sidewalks. In summers, she took charge of their tomato plants.

Her grace, charm and warm smile always lit up a room. As the family matriarch, she was the social glue that connected everyone on both sides of the extended family. She never missed a friend or relative’s birthday.

Alice stayed in contact with Jack’s two sisters’ families, and she was a loyal, wonderful “Big Sis” to younger Violet. Always unconditionally there for Vi and her children, especially in times of need. At age 90, Alice looked 70. She defied gravity with her beauty. Her optimistic spirit, inner strength, and resilience were admirable. She was fiercely independent.

In December 2021, a magical 100th birthday party was held in Alice’s honor in Louisville at her nursing home, attended by many local and far away relatives. There, Alice loved meeting both of her two great-grandchildren for the very first time.

In mid-summer 2022 and at 100 years of age, Alice beat COVID. By late July, the heavens called, and we ultimately lost Alice to God, reuniting her again with her husband. Her daughter’s family was there to say their final goodbyes, along with many long distance relatives who called in to speak to her one last time. She defied gravity again, leaving us for a better place.

In lieu of flowers, donations may be made towards a memorial or charity in Alice’s honor through the Pearson Funeral Home website.

A funeral Mass will take place at 10 a.m., Friday, Oct. 14, 2022  at St. John Roman Catholic Church in Darien. Burial at St. John’s Cemetery in Darien at the family’s plot will immediately follow. A luncheon reception for close friends & relatives of Alice is planned after the burial ceremony, at a location not yet determined.

Alice loved walking the beautiful park-like grounds of historic Cave Hill Cemetery in Louisville. We have established a memorial fund in her honor there, of which donations may be made to purchase a tree and a bench in her name on the grounds.

Please ensure any memorial donations mention “In Memoriam-Alice Canavan on your check or on the online website.

Into her late 80s, Alice walked three miles daily to her beloved Pear Tree Point Beach in Darien. To honor her, we have established a memorial fund in her name to purchase a new teak park bench at this beach, which will be engraved with a favorite quote of hers.

Checks may be made payable to: “Darien Parks & Recreation”. However, to avoid any confusion with normal dept payments, please ensure you put a notation in the “memo” area, that it is for “Alice Canavan Park Bench”. They will be directed to the memorial donation area of the department.

— an obituary from the Pearson Funeral Home, where online condolences and photos may be left