Town Health Department ratings certificates are supposed to be displayed prominently, like this one at the Sugar Bowl.

One food-serving establishment in town received a “C” rating — the worst — in its most recent inspection from Darien Health Department.

The report from the July 2 inspection, detailed below, is the only one released this week by the Health Department. 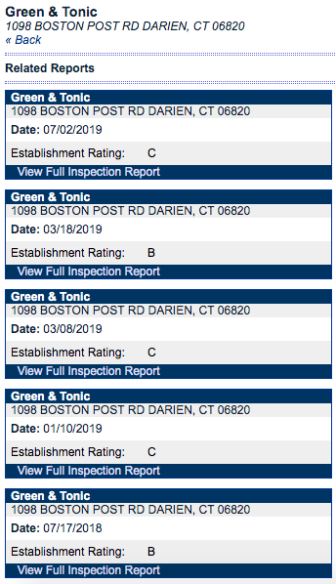 Three “C” ratings resulted from the last five inspections of Green & Tonic, according to the Darien H.D. website.

—Green & Tonic — 1098 Post Road — July 2 — Town Rating: C — State Score: 87 — Inspector’s Remarks: “Employees must receive training, to include hand washing and sanitation; all granulars and powders on shelf left uncovered, even when not busy; handling money and then grabbing gloves … only one employee working during inspection; no detectable sanitizer in red bucket … looks old, dumped and replaced during inspection; some utensils stored unclean, inside of blender cover unclean; bare wood surface near ware-wash sink; no test strips for chemical sanitizer; wall behind blender station unclean.” — Inspector’s Comments: “Self-closer needed on the employee restroom. Tub looks unclean in back room … [is] this used to submerge items? Vybes hemp CBD powder being used in smoothies? Who is the on-site QFO [Qualified Food Operator]?”

One thought on “After Health Department Inspection, Worst Rating for One Darien Food-Serving Establishment”