In 2016, Connecticut passed legislation for the Seal of Biliteracy, a nationally-recognized award given at graduation to seniors that have achieved proficiency in both their world language of study and English.

Beginning with the Class of 2018, school districts can award the Seal of Biliteracy to qualifying seniors. Students must meet state English requirements for graduation, and also achieve intermediate proficiency in a world language on state-approved exams. 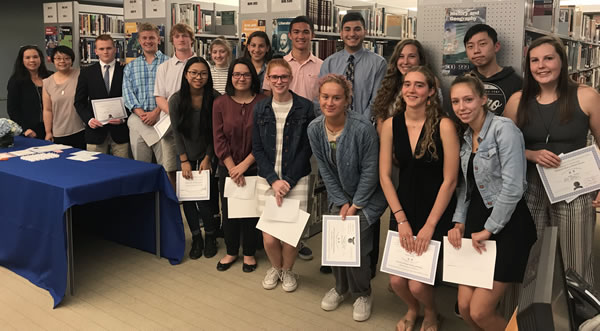 Photo from Darien Public Schools News of the Week newsletter

Darien High School Chinese language students after being inducted in the National Chinese Honor Society. It looks like the photographer asked the students in front to crouch.

“Because it is nationally-recognized, the Seal of Biliteracy sends the message to our students that the United States is formally recognizing the value of a multilingual society, and that speaking more than one language is necessary to be a global citizen,” said Christina Mauricio, 6-12 chair of World Languages.

“It not only honors students that excel in a world language, but also those that arrive speaking their heritage language and then learn English.”

“After senior year, the Seal of Biliteracy will indicate language skills to universities and employers,” she said. “For our students, it validates their long experience with the languages they have chosen to study for many years and will hopefully inspire them to keep developing their skills.”

Students of French, Latin, Mandarin, and Spanish are eligible for induction once they begin their language studies at the high school.

In all, 147 students in Grades 9 through 12 were inducted into the Société Honoraire de Français, Junior Classical League, National Chinese Honor Society (pictured above), and La Sociedad Honoraria Hispánica in front of an audience of their world language teachers, families, and peers.

There were many highlights of the evening — among them, Madame Mason’s comical ode to the intricacies of French, Mr. Gearty’s brief history of the English language’s Latin roots, Mandarin students led by Steven Gómez (Grade 12) reciting their oath in Chinese, and Spanish students participating in their candle-lighting initiation ceremony.

Middlesex and Darien High School were among the 43 schools that competed in the state-wide contest, which featured recitations in 17 different languages. Of our 25 student participants, 15 placed in the top three of their respective categories.