Eversource, the electric utility covering nearly all of Connecticut, says its improving the way it prepares for and reacts to storms like the devastating Tropical Storm Isaias, which hit the state hard one year ago, on Aug. 4 and 5, 2020.

Several days later, 130,000 Connecticut customers were still without power after wind, rain and falling branches and trees damaged electricity lines throughout the state. The utility was criticized for not getting service back.

In an announcement, Eversource described a number of changes and improvements made to its storm response procedures over the past 12 months. 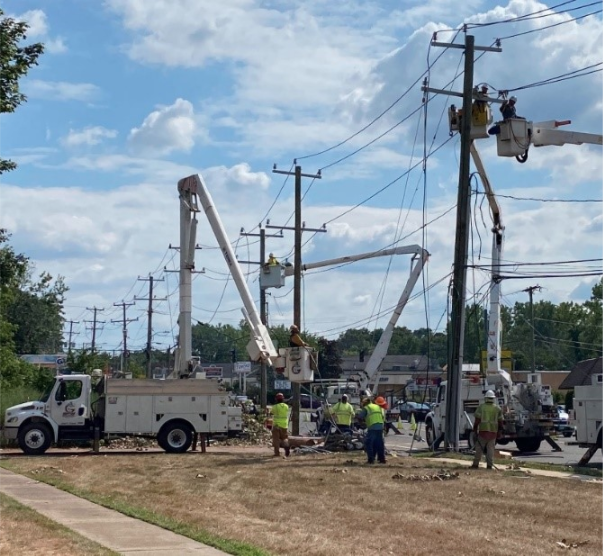 “Since Tropical Storm Isaias, we’ve been listening to our customers, community leaders and regulators, and we’ve used that feedback to improve our Emergency Response Plan (ERP),” said the utility’s President of Electric Operations, Craig Hallstrom.

“Storms are happening more frequently and are more intense,” Hallstrom said. “Since Isaias we’ve had 10 significant storms in Connecticut that in total caused more than 409,000 outages across the state and we quickly responded and restored power to our customers.

“We continue working hard to strengthen the system to better withstand the fierce weather we’ve been seeing,” he said. “While we can’t prevent storms from happening, we understand that customers depend on us to restore power as quickly and safely as possible and we take that responsibility seriously.”

Among the improvements, Eversource’s team of community liaisons will be able to provide information more quickly to all 149 communities the company serves.

The company is also rolling out a new online “municipal hub,” which will be an important tool for liaisons during storms, allowing them to better communicate with municipalities as the company addresses their priorities, critical facilities and blocked roads.

The hub’s outage map will allow local emergency officials to add new information about issues as they happen and see real-time updates regarding the status of their critical facilities and blocked roads.

In addition, Eversource says it’s improved its storm procedures in these ways:

• Leveraging private contractor crews from the western U.S. to supplement home crews ahead of the storm;

• Creating a new team to work directly with municipalities and first responders to prioritize public-safety emergencies, clear blocked roads and speed the response to urgent repairs;

• Implementing a standard cadence of communications to all communities before, during and after a storm, along with improved training and municipal integration for community liaisons;

• Increasing outreach to customers with life-threatening medical needs so they stay well-informed during an outage;

• Using drone technology and other innovative techniques to more quickly identify what needs to be repaired and in which locations.

Along with the revamped ERP, the energy company continues investing tens of millions of dollars annually to strengthen its delivery system, installing:

—thousands of new, stronger poles, thicker “tree wire” and smart grid equipment such as “smart switches” that enable system operators to isolate power outages and remotely reroute power from another source within minutes;

—“smart fuses” that automatically restore power to customers when a tree limb temporarily contacts wires and help to protect the electric system when a problem is detected; and

—optical ground wire that enhances communication between company facilities and protects the high-voltage transmission system from severe weather conditions, such as lightning strikes.

Eversource’s year-round vegetation management program is another major component of its preparedness efforts. In 2020, 77% of power outages in Connecticut were caused by trees, which is why proactive trimming and removal of trees — to the extent property owners allow — is vital to reduce the possibility of outages in all weather conditions.

As the number of dead and dying trees along streets across the state continued to rise, the level of risk to public safety and reliability compounds when property owners refuse to grant permission to conduct proactive vegetation maintenance.

“Even with all of our efforts, a major storm could still cause outages that will last for days,” added Hallstrom. “Storm preparation is a shared responsibility, and we encourage our customers to also be prepared and know what to do before, during and after a storm – right along with us.”

For more information and tips on storm preparedness, visit Eversource.com.