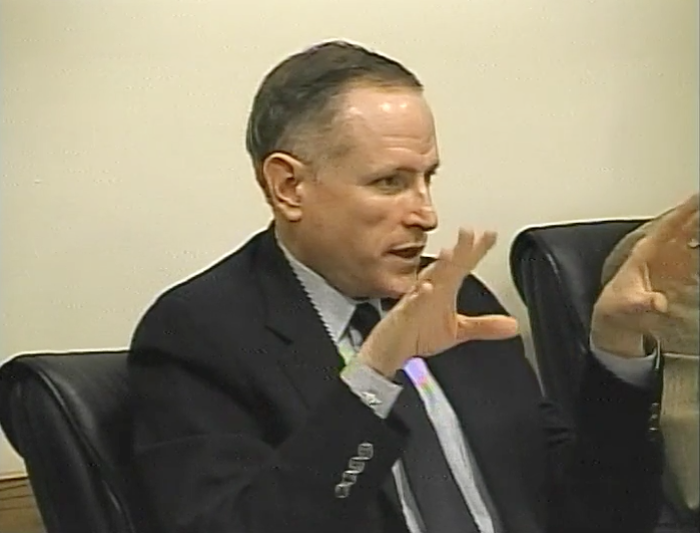 First Selectman Jayme Stevenson and Board of Education Chairperson Michael Harman this week described what they want to spend more (and in some cases, less) money on in the 12 months starting July 1. 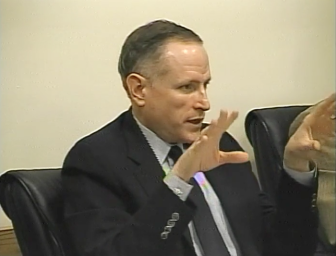 Providing more room for Darien High School students, who now have a crowded cafeteria, more digital devices for students in various grades and more money for ongoing teacher training were among the priorities for more spending in the schools, Harman told the Board of Finance on Tuesday when he officially presented the budget to them.

“The [school district] administration and the board are committed to providing an excellent education for all our children in Darien,” Harman said. “We continue to need the support of our parents and our community to fund the ever-increasing cost of education and the unfunded mandates of the state and federal governments.” 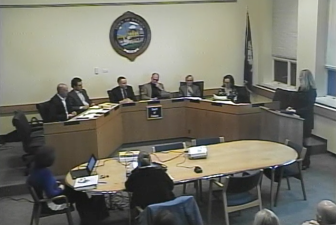 The Board of Selectmen won’t need to spend as much money on pension and retiree medical costs, after an adjustment in calculations for what needs to be invested in that fund, but the board wants money for projects like renovating the public works garage, build more sidewalks and buy two new police cars, Stevenson said.

“This year’s Board of Selectmen budget proposal […] is able to continue to provide the high level of services our residents expect at cost-effective levels, and it begins to address emerging community needs,” Stevenson said. “This year’s budget presented opportunities for spending reductions in operating areas like pension contributions, health care and utilities, allowing us to reprogram funding to satisfy our other town needs.” 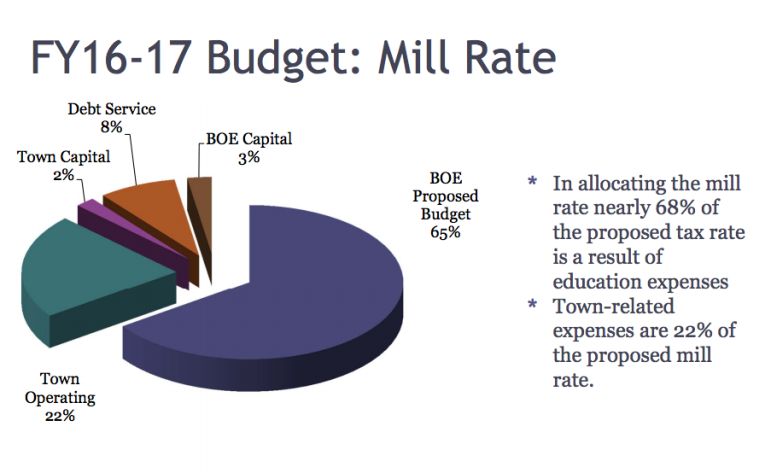 Slide from Stevenson’s budget presentation: The Board of Education’s share of the budget is about two-thirds of the debt service (roughly 6 percent of the total), 3 percent for capital projects and 65 percent for operating expenses, or roughly 74 percent of town spending this year. The statement on the last bullet point in this slide is a bit off — add to the town operating budget of 22 percent the 2 percent in the town capital budget and about 3 percent in the debt service section, and you get a total of roughly 27 percent of the budget for “town-related” expenses.

The Board of Finance will take about a month to continue studying the budget proposals for next year’s spending, with a target date of its March 31 meeting to get answers to questions they have about town spending. After that, they start making decisions on how much of the proposals they want to support, then pass their recommended budget to the Representative Town Meeting, which has a final vote.

Proposed Board of Selectmen budget:

Proposed Board of Education budget:

The operating budget for Darien Public Schools can be cut by either the RTM or Board of Finance, but individual spending items in it are set at the sole discretion of the Board of Education, according to state law. There’s an exception, however: Individual projects in the capital budgets (for expensive projects that are normally paid for through bonding) can be cut, whether the project is proposed by either the Board of Education or Board of Selectmen.

In separate articles on Friday, Darienite.com is publishing (somewhat shortened) transcripts of Stevenson’s presentation and Harman’s short speech, because they give clear descriptions of their budget proposals.

STATE OF THE TOWN SPEECHES from Dec. 7, 2015: Full texts and descriptions on Darienite.com:

Board of Finance Chairman Jon Zagrodsky described what he and his board will be looking at in evaluating the budget proposals (as he did in his State of the Town address in December), and we’re publishing most of his comments below.

Zagrodsky said his panel’s task has been made easier with the cooperation of the Board of Selectmen and Board of Education because Finance Board members have been able to ask questions at budget presentations of those boards and have seen meeting videos (now made available by Darien TV79 online). The Board of Finance expects to schedule fewer and shorter meetings with department heads for that reason, he said.

A key long-term driver of our budget, as we’ve talked [about] is efficiency around capital projects, so that they solve the problem and don’t need to be repeated or redone at some point too soon in the future, and then just staff growth — I mean, it’s just so expensive to gross FTEs [full-time-equivalent work — either from full-time employees or part-time employees] […]

Focusing on those two areas, recognizing that w really need to maintain a certain service level in a town like this, allows us to bend the cost curve in a way that doesn’t doesn’t diminish our ability to provide those services.

On this board, that will be one thing that we might just take an extra look at, just to make sure that that […] any decision around those things is thoroughly done.

A few other areas that we’ll try to focus a bit more on this year — and stealing a lot of thunder from the [Representative Town Meeting’s] F&B [Finance and Budget Committee] folks that have already gotten started in the RTM is also to focus on the revenue this year. Not just the property taxes, but just taking a fresh look at […] non-tax revenue in town […] We haven’t done that in a while, and it’s a good thing to spend some time on.

Dr. [Dan] Brenner [the superintendent of schools], I’ll echo Mr. Harman’s comments. If you decide not to do this, you could probably make a good living just bottling your energy and creativity, so I think I speak for everybody when I say welcome aboard and thank you.

I thought that your doing what I just wanted to highlight is a very good balance between what I would say of short-term wins and victories that you can focus on now with the quiet realization that there are some long-term things that you have to put in place, and think about in a careful and measured way in order to achieve those objectives.

Not to say that your predecessors were not similarly mindful, but your particular focus on that is something that I think, again, all of us in this room know is something necessary and needed — so I thank you for that.

[On Saturday, March 19, Board of Finance members will take a guided tour of Darien Public Schools buildings where capital projects are proposed.] We’ll look forward to taking a look at these various projects — the roofing, the cafeteria expansion, that sort of thing — so that we have a look and feel — a sense of it, and not just what’s on paper. I always find those tours useful.”

You can see the 39-minute video of Tuesday’s Board of Finance meeting here: