Decisions on “unprecedented” commercial development proposals for downtown Darien and the Noroton Heights business district are before the Planning & Zoning Commission, its chair, Susan Cameron, says.

(Cameron’s full speech, as prepared, appears at the bottom of this article.)

Cameron told the Representative Town Meeting that the commission expects to get detailed, formal proposals for various big projects in the coming year, not only for the Corbin Drive/Post Road area downtown, but also from the two major property owners in downtown Noroton Heights. 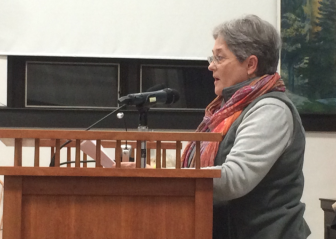 Susan Cameron, chair of the Planning & Zoning Commission, giving her “State of the Town” address Monday night before the Representative Town Meeting

Also in Noroton Heights, a proposal to build a self-storage facility on the tract between Avalon Darien and Hollow Tree Ridge Road is expected to come before the commission.

That spot was thought to be a good spot for more housing, but getting sewer service is now said not to be “viable,” Cameron said. (Previously, Cameron has said that Interstate 95, on the southern side of the property, is said to be too difficult to get a sewer across.)

The Housing Authority is proposing to tear down Old Town Hall Homes, a 30-unit housing development at 719 Post Road, and replace it with buildings with 55 units and that would have elevators. All but two of the new units would have one bedroom.

The commission is working on the Town Plan of Conservation & Development, a state-mandated document meant to guide planning decisions for the next 10 years.

Good evening Madame Moderator, Members of the RTM, other elected and appointed officials, and people of Darien. I am pleased to be here this evening to give this annual State of the Town address.

This year was an election year for Planning & Zoning, but the commission did not change. The commission members remain myself, Steve Olvany, Vice Chair, Eric Voigt, Secretary, Kevin Cunningham, Dick Didonna and John Sini.

STATE OF THE TOWN SPEECHES: Full texts and descriptions on Darienite.com:

Throughout 2015 Planning & Zoning has been working diligently on updating the Town’s Plan of Conservation and Development. This is a process which began in October of 2014.

The Town Plan is an important guidance document for decisions by P&Z, the Board of Selectman and other Town boards and commissions. It is required to be updated every 10 years by state statute. The statutory goal for adoption of this update is June 30, 2016.

P&Z has been working with Glenn Chalder of Planimetrics on updating the Town Plan. He delivered the first draft to us before Thanksgiving, and we will begin discussion of it tomorrow night at 8 p.m. in Room 206.

Find Out About the Town Plan

The specific website address is darienct.gov/townplanupdate. You will also find a link on the Town home page.

We have started putting together the schedule of remaining meetings relating to adoption of the Town Plan. The conceptual schedule is available online. Some key dates are:

In addition to Planning & Zoning’s scheduled meetings, we anticipate a presentation before the Board of Selectmen, as well as a presentation to members of the RTM. The League of Women Voters has also offered to host a public information session at the Darien Library utilizing some of the Library’s innovative technology.

As you read through the Town Plan, you will see it contains policies and action steps to help realize the vision for Darien. Following the adoption of the plan, we anticipate an Implementation Committee will be formed to help with this process.

In addition to finalizing the Town Plan, in 2016 Planning & Zoning will see applications for unprecedented redevelopment in commercial areas of town. We have already been given a first look at proposals for five substantial projects. 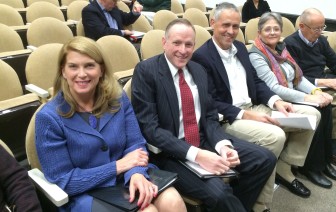 First, there is a proposal for a complete redevelopment of the downtown block anchored by the Post Office, the Corbin building and the Bank of America building back to I‐95. This project proposes a mix of retail, office and residential. It also includes a large green public space.

Second and third, we have seen preliminary plans for the redevelopment of the commercial area along Heights Road from owners on the east and west ends of the street. These developments propose a mix of retail and residential, with the possibility of some office and include some outdoor public spaces.

Links to these three proposals are on the Town home page as well as links to the TV 79 broadcast of the meetings on Vimeo.

Fourth, P&Z recently received an informal look at a self‐storage facility proposed for the Duhaime property, which is the strip between I‐95 and Avalon. This property is currently zoned for residential use, but a study of the property has revealed that access to a sewer line may not be viable. A self‐storage facility would be a new use in Darien.

Last but not least, the Housing Authority has presented a preliminary proposal to tear down and replace Old Town Hall Homes located at 719 Post Road. The existing buildings were built in the 1980’s and contain 30 units, mostly efficiencies. The new proposal is for 55 units – 53 of which will be one bedroom and two of which will have two bedrooms. The developer chosen by the Housing Authority for this project is the same group who redeveloped Allen‐O’Neill.

The new building should be a huge improvement for the residents, most particularly in my mind as they will have indoor elevators to get to upper floors rather than walking up stairs attached to the outside of the buildings.

I know the residents are concerned about being displaced during construction. I have been assured that the Housing Authority will work diligently to accommodate them during this period as best as they can.

This Past Year: Kensett II Approved

The Kensett II proposal received a lot of attention from P&Z this past year, but in the end I believe a very good project was approved resulting in a small expansion of the Kensett development to properties at the end of Wakemore Street.

While only two affordable units were required, the developer offered to provide three affordable housing units offsite in an existing multi‐family house on Hoyt Street. Once the deed restrictions are in place, these units will give Darien the 4‐1/2 points needed to apply for a second moratorium in 2016.

The senior housing project at the old Knobel Brothers property on Settlers Trail is moving along. This project will provide much needed senior housing as well as additional affordable housing units for the town. Importantly, it also corrects a very poor sight line at the intersection of Settler’s Trail and Locust Hill.

In closing, I want to thank my fellow commissioners for their time and dedication. I also want to thank our brilliant Planning & Zoning staff who keep things running so smoothly not only for P&Z but for our other land use boards ‐ ZBA, EPC and ARB [Zoning Board of Appeals, Environmental Protection Commission and Architectural Review Board].