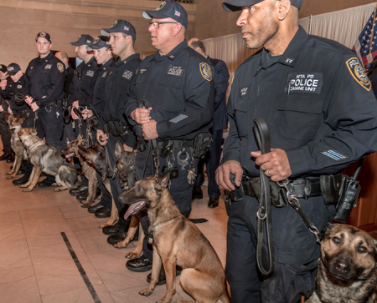 Photo from the MTA Mileposts newsletter 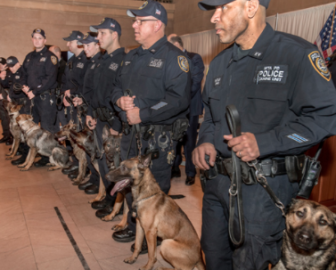 Photo from the MTA Mileposts newsletter

— This article is a version of one in the MTA “Mileposts” newsletter.

Most of the dogs are young German Shepherds and Belgian Shepherd mixes.

A dog’s sense of smell is 3,000 to 5,000 times stronger than the human nose, which comes in handy for following scents untraceable by humans.

Each canine forms a deep, emotional bond with his or her police partner. They not only work together for life, the canine lives with the officer, becoming part of his or her family.

The dogs are named after fallen police officers, firemen, and armed service members.

Among them is Mac, named in honor of NYPD Detective Steven D. McDonald, who was shot and paralyzed by gunfire in 1986 and who passed away in 2017.

Mac and the remaining dynamic duos are already at work checking out suspicious packages and patrolling all of Metro-North’s territory (as well as Long Island Rail Road and the Staten Island Railway).

The dogs and their handlers were trained over a 12-week period in Stormville, N.Y. with state-of-the-art, transit specific training for one of the largest canine explosives detection forces in the country.

With about 50 dogs in service, in the last year alone they responded to over 25,000 calls for service and cleared 4,015 unattended packages.