New England is home to many railroad “firsts,” but none is more impressive than the Mount Washington Cog Railway, the world’s first cog rail line. And it’s still running, at a profit, 152 years late, using some of the original equipment.

Unlike most railroads, “The Cog” doesn’t pull its coaches along a relatively flat line with flanged wheels on two parallel tracks. A cog railroad’s locomotive directly connects its gears to a center rack of iron teeth, pushing the train up the mountain very slowly, but surely. 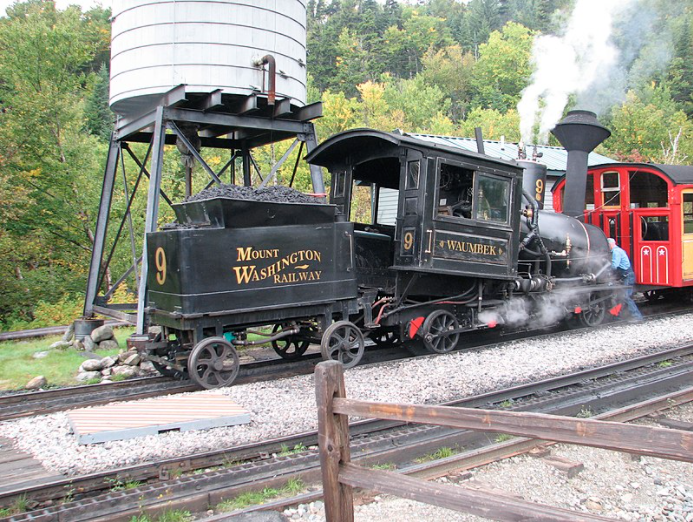 On a normal railroad the train can handle a 2% grade (or climb) at best. On the Mount Washington Cog the grade is as steep as 38% as the train ascends the 6,288-foot peak over three miles of steep track at about 3 mph.

A recent race up the mountain between humans on foot and The Cog saw the train win the climb to the summit by about 10 seconds.

Originally proposed as a tourist attraction by Sylvester Marsh in 1858, the entrepreneur was almost laughed out of the New Hampshire Legislature when he sought a charter. Legislators teased him that he had as much chance of building a train line to the top of New England’s highest peak as building “a railway to the moon.” 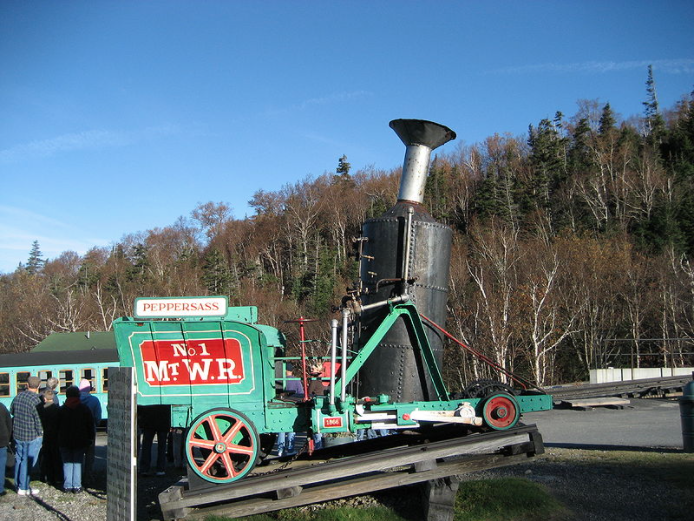 Locomotive “Peppersass” of the Mount Washington Cog Railway in 2006. It’s the world’s first cog locomotive, originally named Hero. Retired in 1878, it was reconditioned in 1929 and wrecked on July, 20, 1929.

But build it he did and it is still running to this date, now owned by the Presby family, which once owned the nearby Mount Washington Hotel and Bretton Woods Resorts. Since assuming sole ownership of this historic line, Presby has poured over $3 million into its preservation and enhancement.

While The Cog still operates two century-old steam locomotives, their unique design with slanting boilers (to handle the steep pitch) requires hand-made replacement parts. These old puffers consume a ton of coal and a thousand gallons of water on every trip while generating a lot of smoke, known to locals as “Cog smog.” 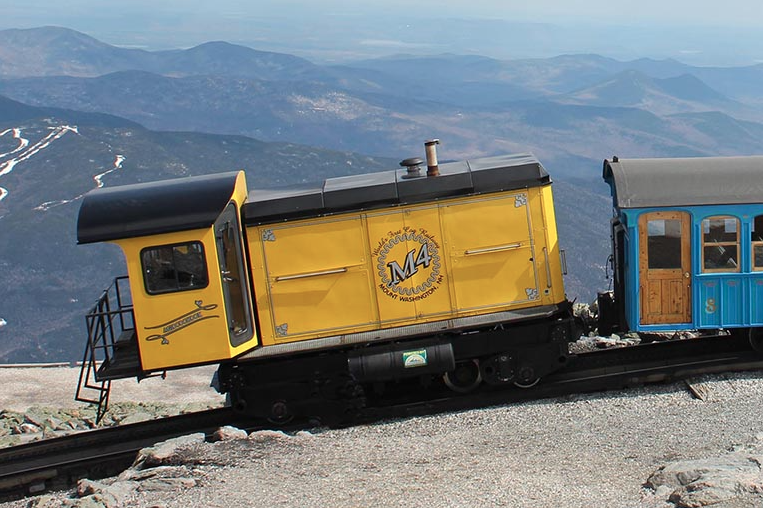 Augmenting the two steam powered trips each day is a fleet of biodiesels that do the journey on 18 gallons of cleaner-burning fuel.

Each locomotive pushes one passenger car carrying 70 passengers. Like the locos, the passenger cars are all hand-crafted on the property and are adorned with beautiful wood inlays. The newest cars also have a reassuring automatic air brake system.

During the COVID shutdown in 2020 the railway accelerated a rehab process, replacing the rails and racks on the line and building a state-of-the-art repair shop. The five-year project was finished in eight months.

Since its opening over 150 years ago The Cog has always attracted crowds. Pre-COVID ridership topped 120,000 annually and with an expanded all-year schedule they hope to surpass those numbers this year.

Unlike some railroads we know, The Cog runs on time thanks to superb maintenance and a dedicated staff of 100. They’re even hiring new engineers and mechanics, some of them coming from an apprenticeship program at a nearby community college.

Summer and fall are the busy seasons, but a wintertime climb half-way up the peak sounds spectacular, given extreme weather conditions atop the peak where the winter wind chill gets to 50 below.

Tickets aren’t cheap, but well worth it for the experience. Some of the fall steam trips are already booked up. If you’re any kind of railfan, The Cog is a must for your bucket list.