A rating of “C,” the worst in the town’s A-B-C ratings system, went to one town restaurant in the nine food health inspection reports released Thursday by Darien Health Department.

The most recent batch of reports are from inspections that took place from  March 8  and 11, except for one dated Feb. 8 (Darien Seafood Market). Seven of the nine establishments inspected received a rating of “A.” One more received a “B.” 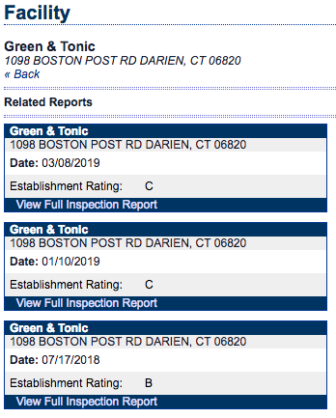 —Green & Tonic — 1098 Post Road — March 8 — Town Rating: C — State Score: 76 — Inspector’s Remarks: “No QFO [Qualified Food Operator] assigned to this location per Cynthia [listed elsewhere in the report as “person in charge”]; no food thermometer available; no hand washing observed–coming to work, touching hair/face, looking in purse, handling forms of payment and just putting on gloves. Have all employees been trained??????; not utilizing a three-bay system to sanitize; blenders need to be completely sanitized, large curing board in back warewash left unclean; no hot water in hand sink; items not labeled (out of original container); chipped knife blade and small plastic board in poor repair (in use) and chest freezing [freezer?] is in poor repair; three-bay sink still not repaired (dripping), bathroom sink and pump have been repaired since January inspection; no self-closer; no covered waste in use during inspection, small white waste receptacle on stairs?; many fruit flies observed, exterminator must treat ASAP (invoice required/submit to the [town] Health Department; wall in poor repair, peeling near Quat sanitizer sink; mop not hung to dry.” — Inspector’s comments: “Rating from January 2019 not posted on front window, posted on back wall. Many repeat violations cited. Expansion of baked goods coming from separate production kitchen now!” 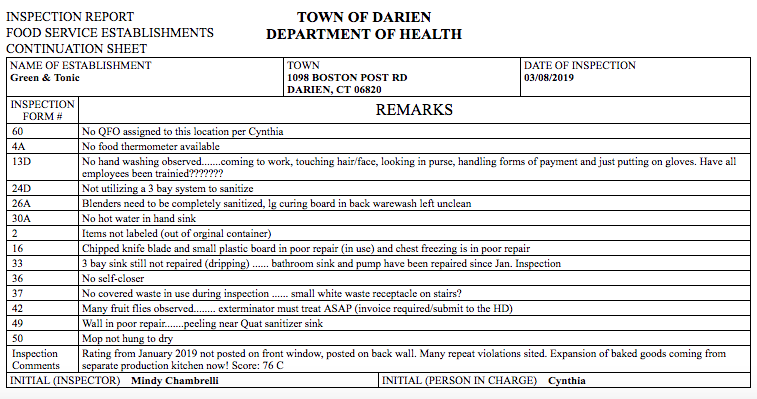 Inspector’s remarks and comments from the March 8, 2019 inspection of Green & Tonic in Darien