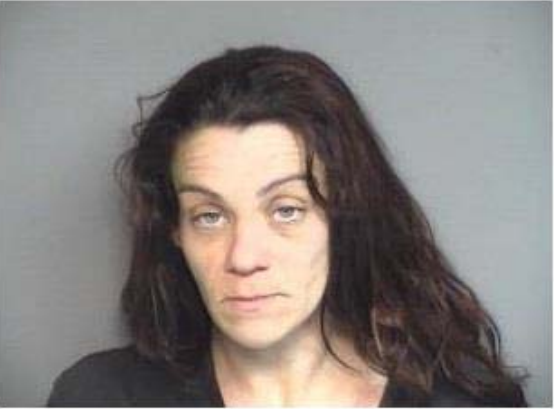 A 36-year-old woman who previously said she had a longtime heroin addiction was stopped in Darien while driving late at night, then led police on a chase down the Post Road at speeds of up to 75 mph, police said. Hours later, she was arrested in Stamford.

This report relies on information from Darien police for descriptions of incidents in Darien, on a Stamford Daily Voice report for incidents mentioned in Stamford (both with police accusations not proven in court), on the Connecticut Judicial Branch website for Plourde’s charges from previous arrests and convictions, and on an NBC Connecticut television report from June 3, 2016.

Annie Plourde, 36, who told police she’s a resident of Canton, a town northwest of Hartford, was turning onto Hecker Avenue from the southbound-traffic lanes of Noroton Avenue at about 1:20 a.m. on Monday, Jan. 2.

That’s not unusual in itself, except that she was taking the left turn from the far right lane, which caught the attention of a police officer who was stopped on Noroton Avenue.

The police officer followed the vehicle, a tan 1999 Mercury Sable, which turned out to have license plates that didn’t belong on that car. The officer stopped the Sable on Hecker Avenue near its intersection with Warner Drive.

Plourde identified herself but said she didn’t have a driver’s license on her. She gave the officer a debit card with her name on it, and gave her date of birth. Plourde said that she and the man and woman in the car with her were returning from shopping in New York City.

The front-seat passenger told the officer that the car was hers, but she was tired, so Plourde was driving. The passenger said the license plate was the correct one, and she had registered it with the state Department of Motor Vehicles when she bought the car in November.

Plourde then admitted that her license was suspended. Other police officers arrived at the scene, and Plourde then started the car and drove off to the Post Road (passing Darien Police Headquarters on the way), turned right and headed down Route 1 toward Stamford, with Darien patrol cars chasing behind her.

Plourde sped as fast as 75 mph down the road, which was empty at the time. Nevertheless, when the Sable reached the Darien-Stamford border, a police supervisor called off the chase. Stamford police and state police were both immediately notified of the incident.

Hours later, on Monday afternoon, a neighbor told police that a home undergoing renovation work since last April and which was supposed to be empty had a tan Mercury Sable parked near it.

Police went inside and found Plourde in the attic. Also present were candles and canned food, indicating that Plourde and perhaps others may have been living there, possibly for some time.

She was the only one present when police arrived, and Plourde gave police little information. Police took her to Stamford Hospital because she appeared to be ill.

Stamford police charged Plourde later on Monday with third-degree burglary and third-degree criminal trespass. Her bond was initially set at $10,000 for those charges.

Darien police were informed and, at 3 p.m., they charged Plourde with interfering with police, driving with a suspended license, engaging police in a pursuit, reckless driving, operating an unregistered motor vehicle and failure to obey state traffic control signs.

Since Stamford police had set a bond, and since police found she was already wanted on other charges in the Hartford and Norwich areas, Darien police didn’t set bonds for her appearance in state Superior Court in Stamford.

Last June, as part of a news report on the use of Narcan (a name for Naloxone) to revive heroin addicts from overdoses, Plourde was interviewed by a reporter from the NBC Connecticut television station in the Hartford area. Plourde was identified by first and last name and age (then 35) and her face shown in the TV report is the same as the person in Monday’s arrest photo.

“Annie is a struggling addict who has used Narcan nine times in the last six months,” the report said. According to the report, her husband had just used Narcan on her, and she said she had last used heroin earlier on the day of the report. In and out of drug treatment programs half a dozen times, she was about to go in another one later that week.

“I’ve been on and off with heroin since I was, probably, 21, and you lose everything to it,” Plourde said in the report.

She has pending charges in these three cases, with rearrest ordered in each case, according to the same website: