William Thorndike Hamlen, beloved husband of Lynn and father of William T. Hamlen Jr. and Anna Hamlen Lyttle, died at home on Oct. 16 in Freeport, Maine. He was 95. 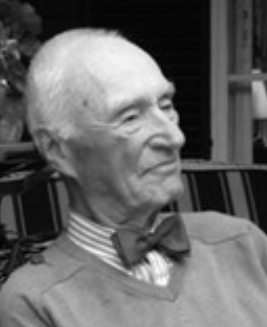 Born in Boston on April 10, 1924 to Joseph and Martha Hamlen, Bill attended St. Marks School and Harvard College. He left college to serve in the Army Air Corps during World War II and returned to graduate in 1947. Bill later received an MBA in business administration from the Harvard Business School.

An outstanding athlete, Bill played hockey and baseball while at Harvard and during his senior year was drafted by the Brooklyn Dodgers to catch for their Nova Scotia farm team.

Bill joined IBM where, over his 45 year career, he worked for Thomas J. Watson, was manager of the Cambridge sales office and retired as a marketing executive in the Advanced Systems Development division of IBM.

A great-grandson of Gen. William Tecumseh Sherman, Bill had an avid interest in the Civil War and the great Native American chiefs. He bore a striking resemblance to the General, whose St. Gaudens statue stands in Grand Army Plaza at the entrance to Central Park in New York City.

Bill met “his bride,” Lynn, singing in the Blue Hill Troupe in New York, where they lived before moving to Darien to raise their children. They returned each summer to the Hamlen family summer house on the island of North Haven in Maine.

Bill Hamlen was a gentleman who lived a long and well-loved life. Bill will be laid to rest alongside his mother, father and brothers Joe, John and Paul, at a private family service in Portland, Maine.