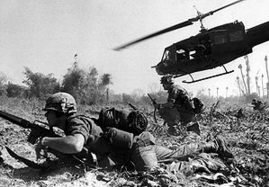 A helicopter in the Vietnam War. (Picture by Jasen1997, posted on Wikimedia Commons)

“Vietnam, the Long War: From Horseback to Helicopter” — the latest in this lecture series starts at at 3 p.m., Monday, Feb. 1:

Armored warfare and motorized transport transformed mobility in the 20th century.  After the Second World War, cavalry took a different form with the helicopter.

A helicopter in the Vietnam War. (Picture by Jasen1997, posted on Wikimedia Commons)

With rotary wing aircraft, troops and supplies could now be moved over obstacles which impeded rival forms of ground transportation.  Shifting from horseback to air mobility will be the focus on this week’s talk.

Mark Albertson is the historical research editor at Army Aviation magazine and is a long-time member of the United States Naval Institute. In addition, Albertson teaches history at Norwalk Community College.

In May 2005, Albertson was presented with a General Assembly Citation by both houses of the state Legislature in Hartford for his effort in commemorating the centennial of the battleship Connecticut.

America’s defeat in Vietnam is the topic of this presentation, spanning the years 1961 to 1973:

will all be discussed.