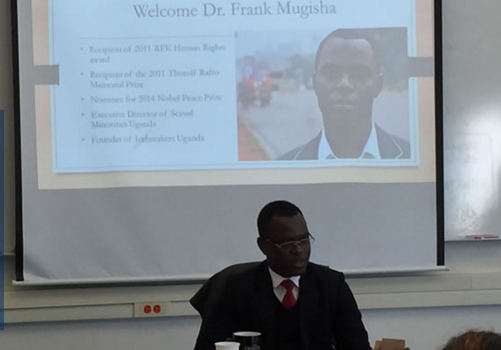 Frank Mugisha is an Ugandan activist on behalf of the rights of the LGBT community. His work has been widely recognized by the international community; in 2011 he was awarded the Robert F. Kennedy Human Rights Award and in 2014 he was nominated for the Nobel Peace Prize.

He is currently the director of Sexual Minorities Uganda (SMUG) which serves as an umbrella organization assisting LGTB rights groups around Uganda and the African continent.

Dr. Mugisha’s visit was made possible as part of his inclusion in RFK Human Rights’ Speak Truth to Power curriculum, through which the life and work of human rights activists are used to help make classroom content come to life.

Mr. Chris Buckley, a history teacher at Darien High School volunteers as a lead educator in the Speak Truth to Power curriculum and help to facilitate his visit. Dr. Mugisha’s visit was hosted by Community Council and the Gay Straight Alliance; students from those organizations had the opportunity to hear from Dr. Mugisha during a luncheon.

In his presentations, students learned about the draconian and repressive laws aimed at members of the LGTB community in Uganda and in other African countries as well as Dr. Mugisha’s life story and the nature of his work.