The Thriving Youth Task Force announced Monday that Allegra Erickson and Christina Passaretti will join its executive board for the 2021/22 school year.

— an announcement from The Community Fund of Darien

Erickson brings a wealth of experience to the Thriving Youth Task Force. She has served our community on the PTO executive boards of Hindley Elementary, Middlesex Middle School and Darien High School and was a board member, Youth Asset Team adult advisor, and Community Investment executive board member for The Community Fund of Darien.

She also served as a deacon and on the building committee at Noroton Presbyterian Church, and is currently a Darien Library trustee.

Erickson also has experience as a product engineer at General Motors, a management consultant at AT Kearney, and an admissions reader at the Yale University School of Management.

She earned her bachelor’s degree in mechanical engineering at Vanderbilt University and her MBA and Master of Engineering degrees at Northwestern University.  Erickson has lived in Darien since 2005 and is married with three children who have or are now attending Darien public schools. 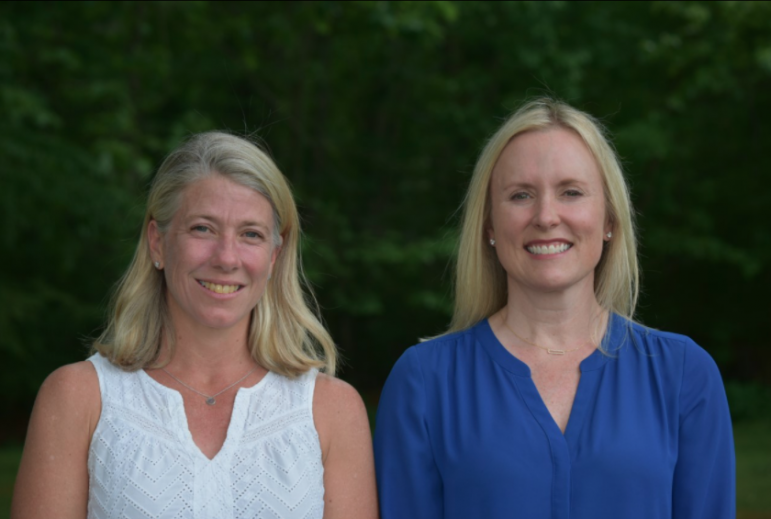 Allegra Erickson, on the left, and Christina Passaretti have been appointed new members of the Thriving Youth Task Force.

Passaretti has been an active volunteer in the community since she and her husband moved to Darien 15 years ago.  She was a member of the Board of Directors of the YWCA Darien/Norwalk and served on their Parent Awareness Committee and has also served on numerous school committees from her two children’s preschool days to their current school, Darien High.

The Rest of the Executive Board

The remainder of this year’s executive board will continue to serve in 2021/22:

The Thriving Youth Task Force (TYTF) is eager to welcome Allegra Erickson and Christina Passaretti to their new roles and is deeply grateful to Shelly Skoglund and Susan Marks for their leadership on the board.

Skoglund will continue to serve as co-chair of the TYTF Survey Committee and on The Community Fund of Darien’s 2021-2022 Board of Directors.

Marks was a valued member of the Executive Board, bringing together her experience as a long time member of Darien’s Board of Selectmen with her extensive experience as a parent volunteer in Darien school parent organizations.

About the Thriving Youth Task Force

The Thriving Youth Task Force, which is convened by The Community Fund of Darien, was created in 2008.

The TYTF brings together leadership from the town, the public schools, parent organizations and social service organizations that work with youth and parents to identify issues affecting the youth of Darien and to develop strategies and programs to promote and empower positive youth development.

Every three years, the TYTF, in partnership with the Darien Public Schools, surveys Darien 7th through 12th grade students about their mental health and substance use patterns, presenting results to parents and the town.

The results of the 2021 survey will be shared with the community this fall. The TYTF members have also provided insight and guidance for the nationally recognized “06820” campaign to reduce binge drinking among adolescents in Darien.